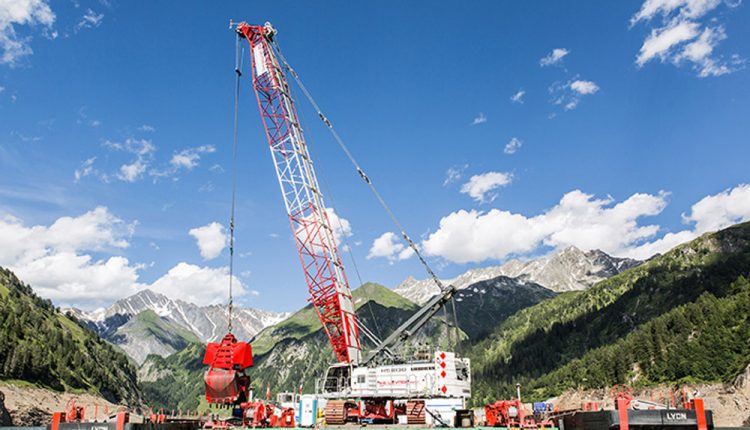 A 130-tonne duty cycle crawler crane from Liebherr is currently operating in the midst of an imposing mountain backdrop in the Swiss canton of Ticino. Its task is to free the reservoir’s drain of deposited sediment. For this purpose the machine, which is fitted on a barge, is equipped with a specially designed mechanical clamshell bucket.

Since the beginning of the summer, a duty cycle crawler crane type HS 8130 HD belonging to the newest generation from Liebherr, is operating amidst the Swiss Alps. The duty cycle crawler crane is being used to dredge large amounts of sediment on the filter grids of the Lake Luzzone reservoir. “In future, this should ensure the unhindered flow of water to the power station in the Ticino town of Olivone,” explains Andrea Baumler, one of the Directors of the Maggia Kraftwerke AG.

At depths of up to 200m, a total of 125,000m³ of material has accumulated in close proximity to the power station. In order to carry out the dredging work the HS 8130 HD is equipped with a mechanical clamshell bucket from Negrini, which was specially produced by the Italian manufacturer for this specific assignment. Thanks to its large filling capacity of 10m³, an average hourly handling performance of about 130m³ can be achieved.

The HS 8130 HD is fitted with a V-8 diesel engine from Liebherr with 505kW / 686hp that fulfils the European emission standards and US standards Tier 4 final. “Through its sophisticated hydraulic system the machine convinces with low fuel consumption. For the dredging assignment here in Ticino the duty cycle crawler crane requires a mere 35 litres of diesel per hour,” states Florian Gabriel, the responsible Product Manager from Liebherr-Werk Nenzing GmbH.

The delivery of the HS 8130 HD to Lake Luzzone imposed an immense challenge for Liebherr, S.E. Levage the French owner of the crane, as well as the transport company JMS Risi AG. On the way to its job site the duty cycle crawler crane did not only have to negotiate numerous hairpin bends but also pass through two narrow tunnels and cross a 225m high dam. Furthermore, shortly before transportation the road had to be cleared of fallen rock.

This journey to the unusual job site required close cooperation between all three of the companies involved. A lot of time and effort was spent in an intensive planning phase. “The high number of bends in the last stretch of the road, the bad weather with heavy rainfall and the danger of falling rock were a real challenge. Thanks to careful planning and the right vehicle everything went without a hitch,” explains Paul Hotz, Operations Manager at JMS Risi AG.

In order to pass through the two narrow tunnels the duty cycle crawler crane had to be transferred to a smaller carrier shortly before its destination. Due to the extremely limited amount of space the uppercarriage and the undercarriage of the duty cycle crawler crane were delivered separately. Thus, the basic machine’s low transport weight of only 51 tonnes and the maximum transport width of a mere 3.5m were an enormous advantage.

The assembly was carried out directly on the shore of the reservoir with the aid of a Liebherr mobile crane. Subsequently the duty cycle crawler crane was driven onto and mounted on a barge, which was also assembled on-site. And so the work could begin. Thanks to its robust design and the high-strength fine grained steel the Liebherr duty cycle crawler crane is ideally equipped for the dynamic forces which especially influence the uppercarriage in dredging operation.

As successor of the proven and successful HS 885 HD, the HS 8130 HD has two hydraulic free-fall winches with 35 tonnes line pull each – about 17% more than the previous model. Further benefits of the winches are the increased rope capacity as well as the automatic adjustment of the rope speed for all working ranges.

An intelligent control system provides for easy handling of the machine and allows for short working cycles. The Liebherr customer S.E. Leverage is very impressed with the high level of operator comfort, “The handling of the HS 8130 HD is extremely smooth and precise. This contributes immensely to the fact that, so far, the work has progressed according to plan.”

Two-year Operation on the Reservoir Is of Utmost Importance

It is anticipated that the duty cycle crawler crane will be operating on the high altitude reservoir in the Swiss Alps, between May and October, for two years. Only after the completion of this work can the power station in Olivone be put back into full operation.

The importance of this project derives from the fact that a yearly average of 180 millionm³ of water flow through the turbines of the Olivone power station and consequently warrant approximately 234,000MWh of energy. The same water subsequently flows on to the Biasca power station which produces 304,000MWh of electricity per year. It is clear that a decelerated and impaired flow of water from the Lake Luzzone reservoir would not achieve this amount of electricity.

Continue Reading
Liebherr-Werk Biberach GmbH
360
Share LinkedinTwitterFacebookEmailWhatsApp
Subscribe to our newsletter
Sign up here to get the latest news, updates and special offers delivered directly to your inbox.
You can unsubscribe at any time
Leave a comment