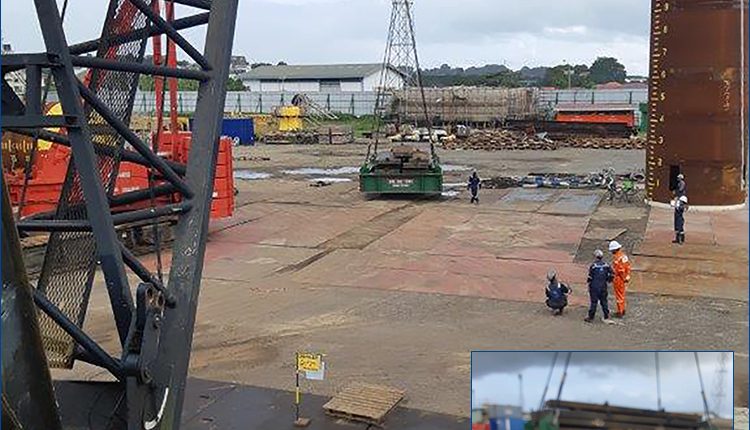 At the request of Goforth Corporation Sdn. Bhd., Sarsco Lifting Technical Services Sdn. Bhd. was mobilised to witness the load test of a ringer crane. A wireless 150t capacity Radiolink plus load cell from Straightpoint (SP) was utilised.

The crane is mounted on a circular rail at a Labuan Shipyard, where it was being prepared to load anchor piles onto a ship and these will be installed subsea as the anchors for a new Petronas floating production storage and offloading (FPSO) unit.

The crane has a capacity of 308t at 24m, but the load test was to be performed at 108t to verify that it could lift that weight at a set radius.

Mike Brown, owner / technical manager at Sarsco, explained: “The only major issue noted, considering the crane was built over 40 years ago, was that the boom hoist winch was out of order, due to a faulty pump. However, the winch brakes were locked on and the lock pawls were engaged, so the boom radius was fixed at 41m.”

He also noted that a new hoist rope had been installed, but he detected a “slight twist” in between the boom and main block, apparently caused by spooling the rope off the bottom of the reel to the top of the crane winch, versus spooling it off the top of the reel. Repairs to both issues were to take place at a later date, once the necessary spare parts arrived at site.

Brown recalled the process: “The crane is mounted on a circular rail, hence it is called a ringer crane, but it was originally on tracks, which are still attached. The shipyard crew attached slings to the hook, the independent load cell, and lifting cradle. The cradle was already loaded with the test weights. The load was then lifted up until it was approximately 1m clear of the ground.”

“The load was lowered back to the ground to facilitate recalibration. To ensure the calibration was set, the load was lifted up and down on a number of occasions; we then lifted the load again and it was held for five minutes to ensure there was no winch ‘creepage’. This time, all was found to be in order.”

The crane has a mechanical boom angle indicator, which tells the operator the angle in degrees the boom is at. The load cell was actually supplied by the shipyard, as were the test weights and cradle. The load testing took one day to complete.

Brown said: “It should be noted that poor spooling and subsequent abrasion this causes, will ultimately affect the life span of the main hoist rope.”

Continue Reading
Load CellsLoad TestingRinger Crane
569
Share LinkedinTwitterFacebookEmailWhatsApp
Subscribe to our newsletter
Sign up here to get the latest news, updates and special offers delivered directly to your inbox.
You can unsubscribe at any time