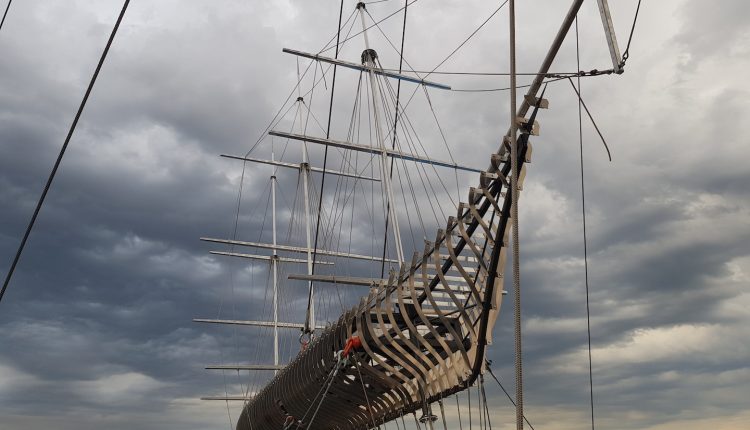 A series of 12t and 25t capacity wireless Straightpoint (SP) load shackles are monitoring loads on wire ropes supporting a 2t steel ship, suspended above the city of Linz in Austria, to symbolise the water-themed Höhenrausch cultural project, which runs from May to October this year.

Six 12t capacity and six 25t capacity load shackles were supplied by SP distributor Pfeifer, which partnered with a local engineering company to create the spectacle atop a parking area in the country’s culture-centric region. The ship is 21m long, 18m wide and “flies” at around 81m, suspended in part by a wooden tower that was originally erected in 2009 for this exhibition.

Pfeifer, a specialist in the provision of ropes for construction, entertainment, and other projects, said: “The load shackles constantly monitor and provide information about the loads. Safety is of paramount importance because the ship is suspended above an area where pedestrians view the exhibit. It was a landmark, custom project, befitting of the cultural significance of the event.”

The hull of the ship was lifted by mobile crane in one piece; the three masts were raised individually and then attached to the structure. Connection points (orange in colour in the photos) on the ship form the main rigging areas for the complex suspension project. The load shackles were rigged strategically to communicate data via SP’s Multiple Wireless Load Cell Controller (SW-MWLC) software package, designed for use on a multitude of platforms.

David Mullard, business development manager at SP, explained that the operator reads the data on a laptop in a central control station. “SW-MWLC software is used to monitor the load shackles for overloads in the rigging wires for safety reasons as visitors are able to walk directly underneath the flying boat,” he said. “The load isn’t necessarily dynamic but with wind shear the loads would certainly change. Unlike many scenarios, here the load shackles are monitoring the in-situ rigging tensions during the exhibition rather than for the lifting operation itself.”

Mullard highlighted key features of SP’s wireless load shackles including their suitability to limited headroom applications. Each load shackle is proof tested and equipped with a hard anodised aluminium electronics enclosure containing a new internal chassis providing IP67 / NEMA6 environmental protection even with the battery cover plate missing. End users benefit from a range of 700m or 2,300 ft, he added.

Continue Reading
Load CellsLoad monitoringLoad Shackles
609
Share LinkedinTwitterFacebookEmailWhatsApp
Subscribe to our newsletter
Sign up here to get the latest news, updates and special offers delivered directly to your inbox.
You can unsubscribe at any time