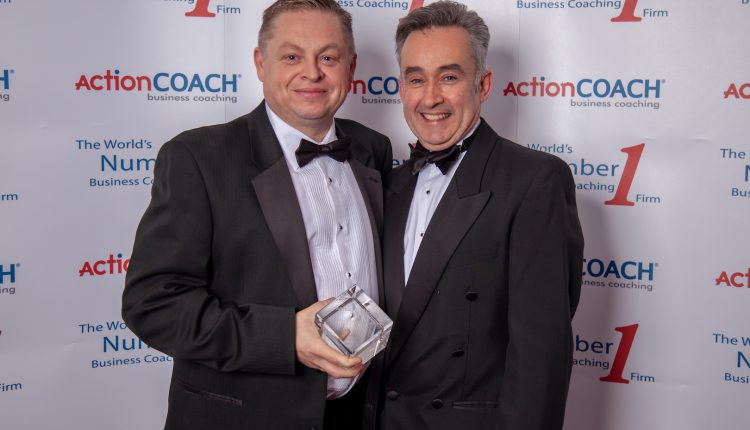 SP had been under the business stewardship of Action Coach, which helps entrepreneurs and owners overcome the challenges in maintaining a company, for five years. At the forefront of the partnership was the business relationship between SP owner and managing director, David Ayling (now global business development director for load monitoring solutions), and Gary Mullins, master coach at Action Coach.

Under Mullins’ tutelage Ayling became a consummate planner and drilled his company on the art of goal-setting and measured performance. As has been widely reported, at the turn of the year, Ayling oversaw the sale of the company to the largest lifting, rigging, and material handling hardware company in the world, The Crosby Group.

Mullins said: “I couldn’t have been more excited and pleased for him when he told me about the sale. It truly recognises him for the hard work and change he and the business have gone through. Dave has worked for a number of years to reach this point, implementing key tools and achieving real results. The business has come along way under his leadership, resulting in the business being strong enough to sell to a major industry player. Dave has personally developed into the true leader he is today.”

The deal marked a natural conclusion for Ayling and Mullins in an immediate sense, and the award was a fitting send-off. Ayling said: “We simply wouldn’t be where we are today as a business without the mentorship of Gary. It’s poignant in many ways that the sale represents something of an end point in our journey, and that our beaming award photo captures our last handshake, at least for the time being. But that’s the epitome of business coaching—it’s about hitting targets. And in a mouthwatering sale opportunity, finances aside, we arguably achieved the biggest goal of all together.”

SP has been well decorated over time by Action Coach, in the Hampshire and Sussex region on Mullins’ watch, notably in the Sustained Business Performance and Business of the Year categories. However, the latest recognition was a special award reserved for SP to commemorate the sale of the company, which Mullins called, “the highest accolade” for any business owner.

He said: “SP is a great case study. They’ve demonstrated the importance of reducing a business’s dependency on the owner or leader. A value of a business grows when the team, not the owner, generates sales profit and cash. SP has reminded me of the essential role learning plays in a company’s journey and the importance of treating your personal goals as important as your business goals. Above all else, SP is an outstanding example of taking the action necessary to realise those dreams. Any opportunity to work with them in the future would be a privilege.”

Continue Reading
Below the HookKnow the LoadLifting Equipment
531
Share LinkedinTwitterFacebookEmailWhatsApp
Subscribe to our newsletter
Sign up here to get the latest news, updates and special offers delivered directly to your inbox.
You can unsubscribe at any time