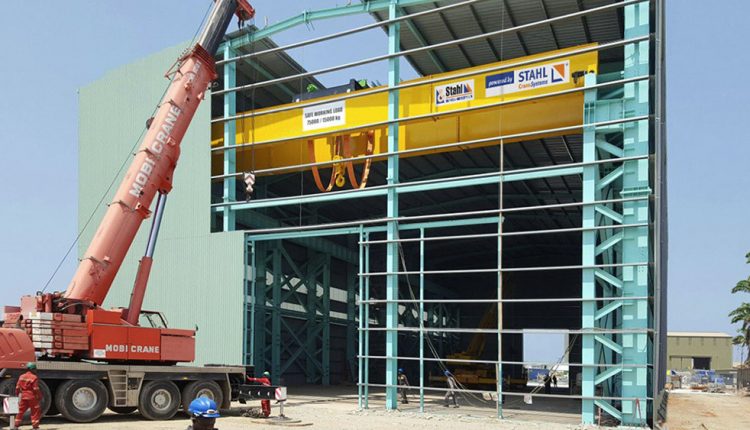 Team work and innovation gets Stahl crane to Ghana

An intercontinental project: the crane system from Stahl Cranes & Hoists from South Africa was erected in General Electric’s new plant in Ghana with the technology of Stahl CraneSystems from Künzelsau.

When Stahl Cranes & Hoists, based in South Africa, received a special order for a two-beam bridge crane it not only had to fulfil the complex brief but transport the crane from Johannesburg by land and sea to Ghana, more than 10,000km away.

In autumn 2015, the certified partner of Stahl CraneSystems, Stahl Cranes & Hoists, based in Johannesburg received an order from Orsam Oil and Gas South Africa (Ortec). A two-beam bridge crane with a total lifting capacity of 75t was to be supplied to the General Electric work in Ghana.

Stahl CraneSystems produced an AS 7 wire rope hoist for it at its Künzelsau plant, and an SH wire rope hoist as an auxiliary hoist. The cranes’ components for the project, such as the controls and drives, were also delivered to Johannesburg by Stahl CraneSystems. Here, Stahl Cranes & Hoists completed and assembled the two-beam bridge crane. But how could such a massive crane make the long journey from Johannesburg in the south to Ghana in the western part of the continent?

Working with engineers from Stahl CraneSystems, the team at Stahl Cranes & Hoists developed an ingenious beam construction made up of three individual parts. In this way, after it had been successfully assembled in the plant in Johannesburg, the crane could be dismantled and packed into two containers around 12m long. These were transported 600km by land to Africa’s largest container docks in Durban. From there, the crane was shipped by sea to Ghana, over 9000km away.

To keep to the project’s tight schedule, the Stahl Cranes & Hoists technical team, led by site quality manager Theunis van Schalkwyk, also travelled to Ghana. The engineers were supported by the expert staff of Orsam Oil and Gas, who were actively involved in the work until completion of the project on the site of the end customer, General Electric. Together, they re-assembled, installed and commissioned the crane.

When carrying out the load testing, the team had to battle a few challenges. Ghana has been in an energy crisis for four years, and the country even has problems with running water at times. Water initially had to be delivered by tanker to fill the BigBags, but these could not achieve the necessary reliable water pressure. This meant that testing the SMC and SLE output devices was more difficult. The oppressive weather conditions and the rough terrain also impeded progress. However, after a few days of diligent work and dedication, all the tests were successfully completed and the crane system was put into operation on time.

The project was made possible by good communication and team work between Stahl CraneSystems, its partner Stahl Cranes & Hoists, Ortec South Africa and Ortec Ghana.

Continue Reading
809
Share LinkedinTwitterFacebookEmailWhatsApp
Subscribe to our newsletter
Sign up here to get the latest news, updates and special offers delivered directly to your inbox.
You can unsubscribe at any time
Leave a comment