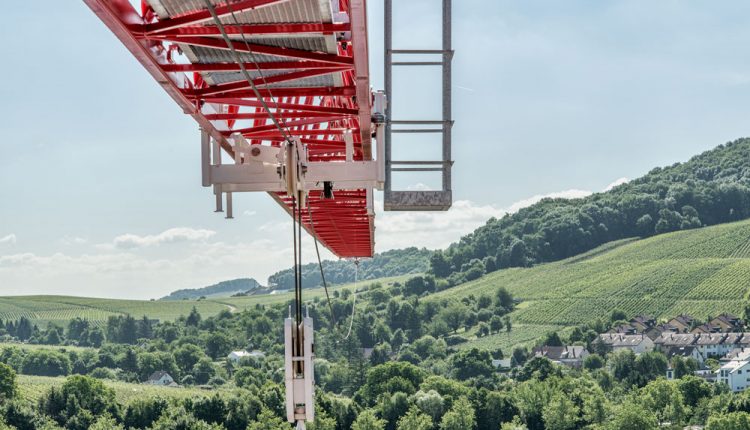 Highest quality and efficiency standards are characteristic trademarks of WOLFF cranes. This also holds true for the new WOLFF 6020 clear which will replace the WOLFF 6015 clear that was introduced in 2008. The newest member of the WOLFF clear family includes technical modifications, offering the customer highest degrees of flexibility and safety in the 140-meterton range.

Due to continuously increasing demands on tower cranes and ever more complex challenges faced on construction sites, WOLFFKRAN decided to completely overhaul the successful WOLFF 6015 clear. Major improvements of its successor, the new WOLFF 6020 clear, include an increased tip load capacity and the integration of numerous design details of the latest WOLFF clear models.

Two versions offering remarkable performance
The new flat-top saddle jib will be available for customers as of September 2017. It is offered as the 6-ton version WOLFF 6020.6 clear and the 8-ton version WOLFF 6020.8 clear, with tree different tower connections per version. “Compared to its predecessor, the 6-ton version can lift 2.0 tons instead of 1.5 tons at the tip at a 60-meter jib radius, while the tip load capacity of the 8-ton version was increased from 1.5 tons to 1.8 tons,” explains Gerd Tiedtke, Product Manager at WOLFFKRAN, regarding the performance of the new model. Like the WOLFF 6015 clear, both versions are designed for a pure 2-fall operation.

A feature that is particularly worth mentioning is the new 28 kw hoist winch Hw 628.1 FU installed in the WOLFF 6020.6 clear allowing for even faster working times with partial load speeds of up to 108 m/min. In the 8-ton version, WOLFFKRAN relies on the tried and tested 45 kW hoist winch Hw 845 FU.

Efficiency and customer demands as top priority
In line with the company’s design principles of keeping things as simple as possible, the WOLFF engineers redesigned the trolley by replacing the rollers with wheel flanges used to date by rollers without wheel flanges and a new guide roller on the jib, thus optimizing the run of the trolley. The connection of the lower belt of jib has also been redesigned to optimize the transfer of forces on the jib. This allows for the use of smaller, more practical bolts, which makes the assembly easier.

The new WOLFF 6020 clear also convinces by offering customers more flexibility. Since the counterweights are no longer included as standard in the basic crane package or the jib extensions, the customer can use counterweight blocks from his existing WOLFF fleet, or buy these separately as required, which is a decisive advantage economically seen. In terms of variability, the 6020 clear does not break with the tradition of its predecessor, as it will be available with three different tower connections. It can therefore be connected to the narrow UV 15 tower system (external dimension of 1.5 m × 1.5 m) as well as to the wider towers TFS 20 and UV 20 (both 2.0 m × 2.0 m).

“Inspired by customer feedback, we have fitted the counter jib with transport aids in the form a special support structure to securely hold up to three jib sections on the counter jib during transport”, explains Product Manager Gerd Tiedtke, regarding another advantage of the new 6020 clear. Further, the counter jib has been fitted with new railings that are suitable for attaching safety harnesses thus improving the safety for technicians working on the counter jib. The WOLFF 6020 clear now also features the support beams for the easy positioning of the bracing rods that were introduced to the clear models several years ago and considerably facilitate assembly of the counter jib. A maintenance crane with a lifting capacity of up to one ton is optionally available to support maintenance work on the hoisting drive unit.

Only a top-class package makes a crane a WOLFF
In comparison to the WOLFF 6015 clear, the new WOLFF 6020 clear features even more galvanized parts, such as railings, platforms and covers, as well as specially coated bolts to prevent corrosion. The modern slip ring system – a long standing standard in WOLFF cranes – at the transition point between the tower and the jib permits the trouble-free transmission of electrical signals. “The electronic overload protection with WOLFF Boost, the latest generation of frequency inverters in the hoist drive, the anti-collision interface, the hoisting gear with automatic power reduction as well as the telecommunication system WOLFF Link are technical features that can only be sourced together from WOLFFKRAN,” explains Tiedtke succinctly.

Continue Reading
Wolffkran
605
Share LinkedinTwitterFacebookEmailWhatsApp
Subscribe to our newsletter
Sign up here to get the latest news, updates and special offers delivered directly to your inbox.
You can unsubscribe at any time
Leave a comment