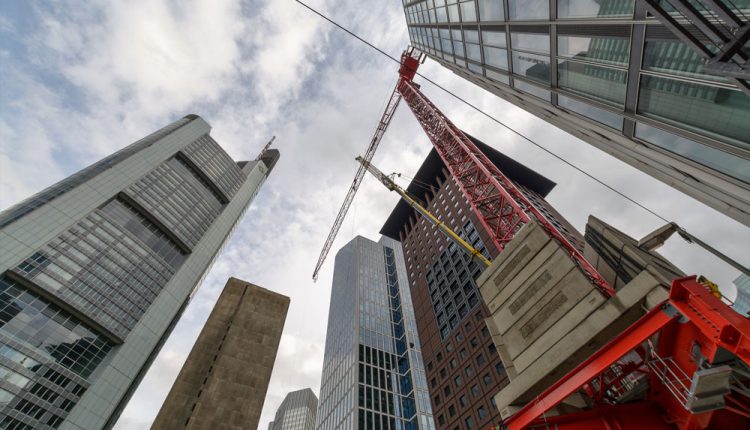 Three WOLFF Cranes at the OMNITURM in Frankfurt’s Banking District

The OMNITURM that is currently rising skywards in Frankfurt’s banking district is adding new momentum to the city’s skyline. Two WOLFF cranes have been in operation on this new high-rise building with the characteristic shift in the middle since the beginning of the year. A third WOLFF will be joining them this summer. Decisive criteria for the contracting company, Adolf Lupp GmbH + Co KG, to carry out this job with WOLFF cranes were their high load capacities paired with their ability to work in an extremely confined construction site in a busy city center. A circumstance that already proved to be quite a challenge for the entire team during the assembly.

In order to not disrupt traffic, the WOLFF 355 B luffing crane with its 55-meter jib and the WOLFF 6031.8 clear trolley jib crane with its 32.5-meter jib were both set up on a weekend. The planning of the complex assembly alone required several meetings between WOLFFKRAN, the construction company Lupp, the mobile crane rental company and the local site supervision. “The construction site is surrounded by busy streets and narrow plots with high-rise buildings, making the crane installation itself a major technical and logistical project,” says Thomas Odenbreit from Sales Germany at WOLFFKRAN.

Trouble-free assembly in 48 hours
The WOLFF 355 B is installed on a 6.2 x 6.2 meter WOLFF Cityportal, under which the traffic can flow whilst the construction work is in progress. Six service technicians and three mobile cranes were on site for its assembly. Saturday was dedicated solely to preparation work: A 160-ton mobile crane was used to assemble the portal, the first three tower sections and to position the central ballast. The ballasting was supported by a 30-ton mobile crane. At the same time, the tower top and the counterjib were unloaded and prepared for assembly. By the evening everything was ready for the set-up of 350-ton mobile crane with luffing tip during the night and the subsequent assembly of the WOLFF 355 B to a tower height of 64 meters on Sunday.

The WOLFF 6031.8 clear trolley jib crane with a hook height of 61 meters was assembled shortly after the luffing crane. “In the summer, the 6031.8 will be used to assemble a second WOLFF 355 B luffing crane in so far, that a mobile crane will only be needed for the tower sections and slewing part. The newly set up luffer will then in turn dismantle the WOLFF 6031.8 clear. In both cases, mobile cranes for the assembly, and consequently also costs, were reduced for the customer,” explains Odenbreit.

Powerful WOLFFs for a narrow city gap
The two WOLFF 355 B luffing cranes will gradually grow with the building up to a final tower height of 184 meters. With their jibs that can be raised to a near vertical position and their short counterjibs of only 6.6 meters, they are the ideal work horses for this tight construction site and can easily swing past the neighboring buildings and the flat-top WOLFF 6031.8 clear. Their high lifting capacities of 8.5 (WOLFF 6031.8) and 14 (WOLFF 355 B) tons are necessary for lifting construction material and prefab elements. “The heavy steel beams – concrete girders for ceilings and walls – some of which weigh over twelve tons, will partially even need to be lifted by both luffers together by means of a so-called tandem lift,” explains Thomas Odenbreit. “As a result, there is no need for stronger cranes on the site. This is the most efficient solution for the customer.”

Due to the particular shape of the building with its outward shifting floors at mid-height, the cranes are installed around ten to twelve meters away from the building instead of the usual five to six meters. Thanks to the extremely strong WOLFFKRAN tower system HT 23 however, only four tie-ins to the building are necessary, despite a final tower height of over 180 meters. “With an external dimension of 2.30 meters, the HT 23 is as strong and stable as a tower system measuring 2.50 meters, but it is slimmer and therefore ideal for the confined construction site,” says Odenbreit.

Frankfurt remains WOLFF territory
With the planned completion of the 45-storey “high-rise with a hip swing” in 2019, Frankfurt am Main is entitled to a new claim: It will have the only crossroads in Europe where there is a high-rise building at each of the four corners. One of them, the TaunusTurm, was also built with four WOLFF cranes, between 2011 and 2014. WOLFFKRAN‘s experience in working on busy inner-city construction sites coupled with its technological leadership in the field of luffing cranes were crucial factors in the contracting company Lupp’s decision to use WOLFFKRAN for this skyscraper project. Within the last year, Lupp has extended its fleet by three WOLFF 6031 clear and one 7534 clear, which was only launched at bauma last year. Two of Lupp’s own WOLFF cranes will shortly go up on the construction site of the so-called “T-Rex Towers” at the Senkenberganlage in Frankfurt.

Continue Reading
Wolffkran
632
Share LinkedinTwitterFacebookEmailWhatsApp
Subscribe to our newsletter
Sign up here to get the latest news, updates and special offers delivered directly to your inbox.
You can unsubscribe at any time
Leave a comment