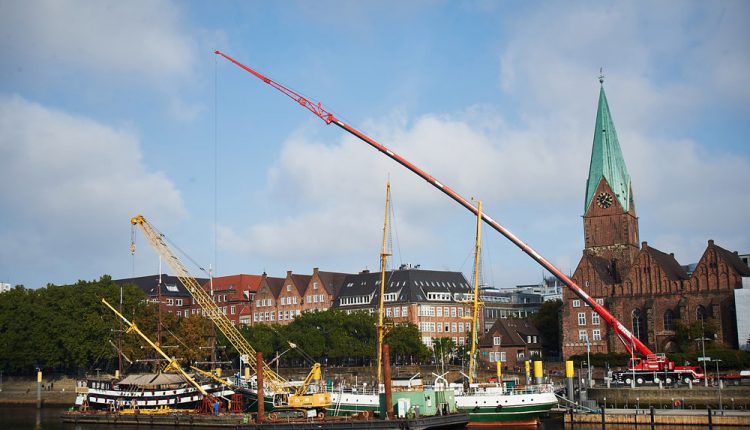 In October the 110 year-old sailing ship, the Alexander von Humboldt, was relocated from Bremen’s Europahafen to its final berth on the Schlachte, Bremen’s maritime district. The famous sailing ship had previously been converted into an event and hotel vessel. As a result of the limited clearance heights of the bridges, the masts had to be removed before it could be transported and then refitted when it reached its final resting place. Crane contractor Toscani used a Liebherr LTM 1200-5.1 mobile crane and a Liebherr HS 853 HD crawler crane for this job.

With its 25 green sails, the Alexander von Humboldt gained international renown as a publicity vessel for “Beck´s Bier”: 1035 m² of sail area on three masts, the largest mast towering 34 metres into the air, the ship measures over 60 metres in length and weighs in at over 800 tonnes when loaded and with a 23-man crew. After undergoing several refurbishments and conversions, in 1988 the ship was named Alexander von Humboldt after the German naturalist and explorer. Since then the sailing ship has covered more than 300,000 nautical miles.

Now the impressive sailing ship is to be retired to be used as a hotel and restaurant ship on the River Weser in Bremen. However, its final journey required the removal of its masts so that it could pass under several bridges on its way to the Schlachte.

The masts were removed at the Louis Krages Pier using the 200-tonne LTM 1200-5.1 mobile crane. The HS 853 HD crawler crane, stationed on a barge immediately next to the Alexander von Humboldt, was used to refit the masts once the ship had arrived at the Schlachte. The LTM 1200-5.1 was stationed on the riverbank. It installed the yard arms which are round rods which are fitted to the mast perpendicular to the direction of travel. It was also used for working from basket which was required for the intricate installation work. The special challenge for the mobile crane was the constricted space available on the bank. The promenade directly next to the ship was too narrow. It therefore had to be assembled at St Martins Church despite the fact that the available space was very narrow as a result of having to leave the full width of a rescue route clear. That meant that the LTM 1200-5.1 had to work with a radius of 65 metres, hoisting weights of up to 2.8 tonnes.

Toscani based in Langen near Bremerhaven started trading in 1930 at an ice cream parlour. A few years later it opened a car hire business which was the first step towards the company as it exists today. Later it added buses to its fleet. In 1964 the business was expanded with a towing and rescue service. Today, family-run B. Toscani und Söhne Automobile GmbH operates mobile cranes, rescue and towing vehicles and heavy haulage vehicles with a workforce of around 20 people.

Continue Reading
Liebherr-Werk Biberach GmbH
313
Share LinkedinTwitterFacebookEmailWhatsApp
Subscribe to our newsletter
Sign up here to get the latest news, updates and special offers delivered directly to your inbox.
You can unsubscribe at any time
Leave a comment