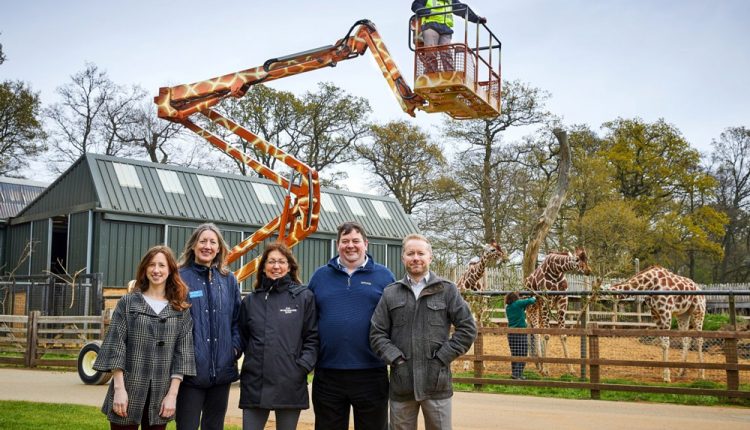 To mark the occasion, an event was held at ZSL Whipsnade Zoo in Bedfordshire, which coincided with the official handover of a unique giraffe boom lift, affectionately named Yazz, to the charity. Hand-painted with the characteristic markings of a giraffe, the boom lift has spent the last two years in Nationwide Platforms’ fleet, raising awareness and funds for ZSL throughout the UK with all rental proceeds being donated towards the charity. The boom lift will now be permanently located at ZSL London Zoo to carry out various site and building maintenance tasks.

Adam Rochelle, Lavendon Group Financial Controller, said: “The Savannah Project stemmed from the physical similarities of giraffes to our powered access machines. We chose ZSL because of its strong reputation for conservation, research and education, and because they also manage a number of facilities including Whipsnade, from where the original inspiration came. Rather than simply donating a new machine and painting it, however, we decided to undertake a more ambitious route.”

This began with a competition between Nationwide Platforms’ apprentice engineers to completely refurbish two end-of-life electric Genie boom lifts, originally earmarked for disposal. With guidance and support from suppliers Genie, Pirtek and Platinum Batteries, a judging panel then decided which of the two machines would become Yazz.

The winning machine was sandblasted, re-primed, painted and lacquered by Freelance UK which agreed to support the project by providing its transport, labour and materials all free of charge. Local graffiti artist, Peter Barber, was then commissioned to hand paint the chosen boom lift with giraffe-type markings. Peter completed the work using an electric scissor lift having received IPAF scissor and boom training from Nationwide Platforms’ training team.

Since its introduction in August 2015, Yazz has been available for hire from Nationwide Platforms and has toured the UK raising both awareness and funds for ZSL. As both machines had been completed to such high standards however it was decided that the second boom lift would be repainted and sold, with the profits also being donated toward the overall ZSL fundraising.

Rochelle, added: “I would like to thank the project team for all their hard work and personal time spent on the project, our sponsors for their support and involvement at the start, and all the ZSL staff. Everyone at ZSL should be very proud. What you do is great, not only do you undertake world leading conservation and research but you educate and inspire others. And that really is the point. You inspire us all, individuals and organisations, to do our bit. Keep inspiring us… it’s amazing where that can lead.”

Sandra Crewe, Head of Corporate Partnerships at ZSL, added: “We, at ZSL, are extremely grateful to Lavendon Group for kindly donating this giraffe-inspired piece of machinery. ZSL is involved in conservation projects in more than 50 countries globally, while also running two world-leading zoos in ZSL Whipsnade and ZSL London Zoo, and successful partnerships such as this go a long way to enabling ZSL to continue its mission to promote and achieve the worldwide conservation of animals and their habitats.”

As part of the Group’s on-going CSR programme, Nationwide Platforms is continually taking part in a variety of projects to help raise funds and awareness for a number of charities. Last year, for example, this saw them raise more than £9,500 for MacMillan Cancer Support as well as team up with sustainable development charity, Raleigh International, which will see two of its employees sent out to Borneo and Tanzania as Volunteer Managers to help create lasting change in a challenging environment whilst learning vital leadership skills.

Continue Reading
430
Share LinkedinTwitterFacebookEmailWhatsApp
Subscribe to our newsletter
Sign up here to get the latest news, updates and special offers delivered directly to your inbox.
You can unsubscribe at any time
Leave a comment