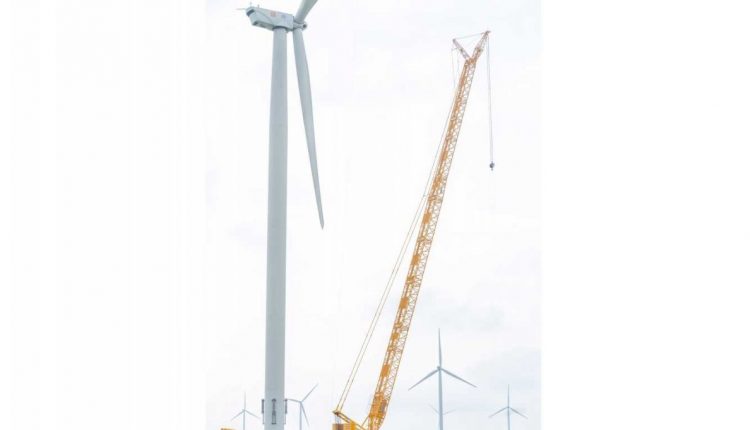 CEZ Group in Romania has purchased a Liebherr LR 1600/2 crawler crane and an LTM 1130-5.1 mobile crane. The subsidiary of the Czech CEZ Group runs the largest onshore wind farm in Europe. The new machines will be used for the maintenance and repair work there and for modernising the CEZ wind farm.

240 rotors each generating 2.5 Megawatts have been turning at Dobrogea in the rural district of Constanta, close to the Romanian Black Sea Coast, for the last six years and all of them require maintenance and modernisation work. The wind farm is run by around 30 personnel. The facility generates up to 600 Megawatts of electricity. That is enough to supply around one million households in the country with green electricity.

Jan Jires, the Senior Manager of the CEZ Wind Farm, says: “To simplify the maintenance work process, it was important for us to buy cranes which feature the very latest technology. That is why we decided to buy the two Liebherr cranes. We also appreciate the support available from the local Liebherr team.”

CEZ Group in Romania ordered the LR 1600/2 crawler crane in the SL3F wind farm configuration with a 108-metre main boom and 12-metre fixed jib. The towers of the wind turbines on the farm are 100 metres high. That means the new crawler crane can reach all the components with ease.

The main areas of use for the LR 1600/2 will be replacing blades, gearboxes, generators and other heavy gondola components. The LTM 1130-5.1 with a maximum lifting capacity of 130 tonnes and a 60-metre telescopic boom will be used as an auxiliary crane both for setting up the LR 1600/2 and also for hoisting long components such as wind turbine blades.

“High safety standards in all our processes are enormously important to us. Liebherr has an outstanding reputation in this respect as well”, adds Jan Jires.

The two Liebherr cranes sees CEZ Group in Romania entering a whole new phase as these are the first cranes the company has ever bought. CEZ Group is among the 10 largest energy companies in Europe and is also active in other fields relating to the generation and distribution of renewable energy types.

Continue Reading
Liebherr-Werk Biberach GmbH
5,094
Share LinkedinTwitterFacebookEmailWhatsApp
Subscribe to our newsletter
Sign up here to get the latest news, updates and special offers delivered directly to your inbox.
You can unsubscribe at any time