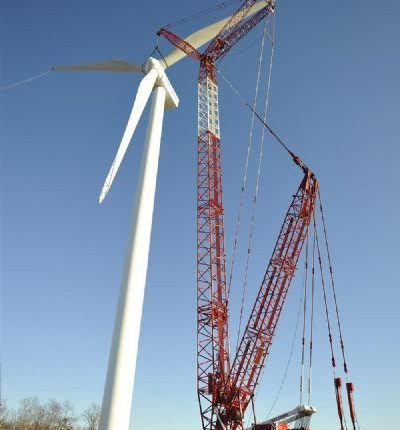 By Elian Ionescu On Mar 15, 2012
647
Share
It will be the largest turbine in Fall River. But that’s faint praise. It will simultaneously be one of the largest wind turbines in the state, in New England and, perhaps, the country.

With three years in the making, this giant producer of electrical power will be up and operating in February.

“Philips Lightolier has been proud to call Fall River home for more than 40 years. As part of the company’s ongoing commitment to sustainability and the local community, Philips began the process of commissioning a wind turbine at our Fall River facility more than three years ago,” said Bob Wedekind, project manager. “This supports the company’s ambition of making the Philips Lightolier facility a net zero plant and one of the greenest manufacturing facilities in the state of Massachusetts.”

Over the last several years, the facility in Fall River has been recognized for its sustainability efforts by:

The single huge wind turbine is just the latest in Philips’ long line of sustainability efforts.

“The wind turbine at the Philips Lightolier facility is a great example of a public-private partnership to achieve sustainability goals and create jobs. Philips worked with the state of Massachusetts and the Clean Energy Commission Center to qualify for grants and tax credits in support of the turbine, while funding the project,” added Wedekind.

“This is part of the company’s ambition to make the Philips Lightolier facility a net zero plant and one of the greenest manufacturing facilities in the state. Philips’ funding went toward the purchase of the wind turbine, while regional funding went to support the local construction and services associated with its development.”

The wind turbine will stand 40 stories tall or 415 ft. (126 m) from base to the tip of the blade. The blades alone measure 148 ft. (45 m) each, and when fully operational, the turbine will have a 2 megawatt capacity. It is expected to produce about 60 percent of the electricity needed to power the Philips Lightolier plant.

“Philips entered into this project with the specific goal of looking for a U.S. partner to build the wind turbine and did extensive research into companies that could accommodate a turbine of this size. Unfortunately, most U.S. companies build smaller, lower capacity wind turbines, or could not support a custom project,” said Wedekind.

It is truly an international production, crafted and designed from the greatest manufacturing nations on earth. The wind turbine has components that come from all over the world, including Germany, Denmark, France, Italy, China and the United States. Many of the major electrical components came from Germany and Austria, the switches and sensors from Finland, Denmark, France and Italy, the super capacitor from the United States and the blades and main stack were made in China. It is only powered by wind and will generate a 2 megawatt capacity.?

Unlike Cape Cod, where residents continue to fight the implantation of such large turbines, saying they blot the physical and visual landscape, the Fall River generator will be received in quite a different manner.?

“There are several differences. This is only one turbine, not a wind farm and the location, Airport Road in Fall River, is an industrial park, not a residential area,” said Wedekind. “In addition, the turbine is for generating power for the plant, not for residential use. Philips worked with local community leaders to share plans and ensure constant communication on the turbine, as well as working to answer questions and concerns about its operation.”

Generators of the idea are calling this a “win-wind” situation.

“Everyone gains with this type of project. The power that is generated will supply 60 percent of the plant’s electricity needs and allow the company to invest those savings back into local jobs to produce energy-efficient lighting products right here in the U.S.,” added Wedekind. “During the past six months, Philips has not only worked with the ILWU, USW, IBEW, and local contractor J.L. Marshall and Sons Inc., and Glynn Electrical, but also has, as a condition of the project, required that the turbine to be delivered to the Port of Fall River in order to employ hundreds of people.

“Moreover,” Wedekind added, “Wind energy is a clean, renewable energy source unlike many power plants that generate electricity. It doesn’t produce any CO2 and is a more environmentally friendly way to produce power.”

There were as many players in this successful joint project as there are directions for New England winds.

“In tandem with employees, business partners, governments and non-governmental organizations, we work towards improving our communities and our manufacturing practices,” said Wedekind. “In order to develop a renewable energy source on this site, Philips collaborated with Fall River Mayor Flanagan, Governor Deval Patrick, the Fall River Conservation Commission, the Fall River City Council, the Massachusetts Clean Energy Center (MassCEC), and the Massachusetts Office of Business Development.”

Perhaps, in the ultimate irony, wind itself will be a significant factor in how, when and how easily the skyscraper-tall turbine will be erected. There is danger to the construction workers who must assemble and raise it so high.

“Wind could be a challenge as it might make it difficult for the construction crew to mount the turbine. At these heights, there are air currents that can pose significant challenges such as swinging the crane, that make it very difficult/dangerous to raise and align the different components of the turbine,” said Wedekind.

Continue Reading
647
Share LinkedinTwitterFacebookEmailWhatsApp
Subscribe to our newsletter
Sign up here to get the latest news, updates and special offers delivered directly to your inbox.
You can unsubscribe at any time
Leave a comment