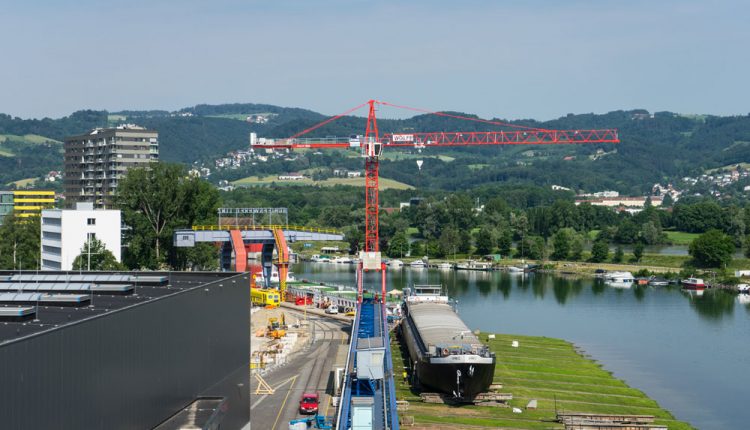 WOLFF on Track(s) at the ÖSWAG Shipyard in Linz, Austria

From Alpine terrain to narrow city streets, from dry dessert territory to shipyards by the water – a WOLFF feels at home in all these environments. As such, the ÖSWAG Werft Linz, an Austrian shipyard founded in 1840, recently installed a WOLFF 7532.16 cross on its premises. The crane will be used for maintenance work on riverboats at the slipway, which was enlarged several years ago to accommodate larger vessels of up to 23 meters wide. WOLFFKRAN convinced the ÖSWAG team not only with its high-performance crane, but also with a solution for the technically challenging adaptation of the travelling undercarriage.

The customer’s requirements for a new shipyard crane presented the Austrian WOLFFKRAN team with numerous challenges. First of all, the WOLFF 7532.16 cross needed to be installed on an existing 6-meter-high rail structure, on which it can move back and forth during operation. Further, the width between the tracks of the rails was only 4 meters. Finally, the crane had to pass over an existing 5.5 meter high control stand installed on the rail structure. “Planning this was extremely demanding. The narrower the track width of the undercarriage, the more ballast is necessary to stabilize the crane. In this case, 60 tons of central ballast was used for the 7532.16 cross. At the same time, it was crucial to keep the individual wheel loads exerted on the rails to a minimum and not to exceed 18 tons per wheel.” explained Wouter van Loon, Product Manager at WOLFFKRAN. The team used a standard WOLFF undercarriage with a 5.5-meter track width as a basis, and modified it so that it would fit on the existing rail structure with a 4-meter track width. In order to not exceed the maximum permissible forces exerted on the tracks, the 145-ton operating weight of the crane had to be evenly distributed over 16 wheels (four wheels at each corner of the undercarriage).

Power and a long lifecycle make the perfect shipyard crane
“The collaboration with ÖSWAG Werft was extremely cooperative from the outset. The entire team supported us during the extensive planning phase and also during the installation, which took around a week,” reported WOLFFKRAN Austria CEO Dieter Reuberger. “Our old luffing crane from 1936 was beginning to show its age, both in terms of lifting and regulatory requirements,” said Horst Krammer, who is responsible for the plant and operational engineering at ÖSWAG Werft Linz. “In addition to WOLFFKRAN’s farsighted project planning, we were also convinced by the performance of the WOLFF 7532.16 cross with its 17-ton carrying capacity at a jib radius of 14.3 meters and a total jib length of 40 meters. It is primarily used to move ship dollies weighing up to 17 tons which are used to move ships out of the water.”

Even though this project was the first of its kind for WOLFFKRAN Austria, WOLFF cranes are a common sight on shipyards in other countries. In recent years, a WOLFF 6531 cross went up at the Scheepswerf Kooiman Hoebee in Dordrecht, the Netherlands, and a WOLFF 1250 B luffer at the Engine Repair Dry Dock in Antwerp, Belgium. The WOLFF 7532 cross in Austria will – like its predecessor – be in operation on the banks of the Danube river for many decades to come.

Continue Reading
Wolffkran
730
Share LinkedinTwitterFacebookEmailWhatsApp
Subscribe to our newsletter
Sign up here to get the latest news, updates and special offers delivered directly to your inbox.
You can unsubscribe at any time
Leave a comment