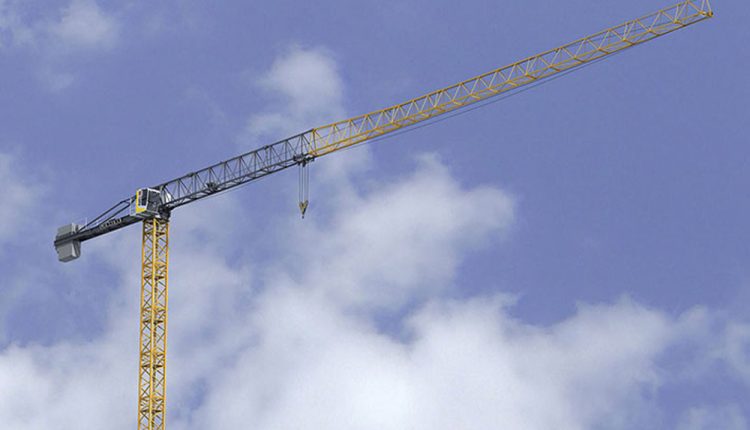 Liebherr is unveiling a new series of top-slewing cranes with a flat-top design at the Bauma Conexpo India: the NC-B cranes. The new 16 EC tower system has been developed for these cranes. The cranes also have a new, variable climbing system. The new concept includes a large number of time-tested elements from existing Liebherr top-slewing cranes.

The new NC-B series was specifically developed to meet the requirements for use in conurbations in emerging countries. The first two models in the new series can cover a wide range of construction projects in these areas. The nine-tonne version is ideal for hoisting heavy prefabricated components – for example for building shopping centres, production plants and car parks. The six-tonne NC-B 6-62 crane, meanwhile, is perfect for erecting tower blocks in inner city areas where they work with low load weights but enormous hook heights.

The new 16 EC tower system with external dimensions of 1.60m x 1.60m was developed for the new NC-B cranes. As usual with tower systems in these classes, the tower sections are connected using pins and are climbable. The standard length of the tower sections is 3.90 m. Extended tower elements with a length of 11.70m can also be used to reach a maximum free-standing hook height of 53.20m quickly and at low cost.

The hydraulic climbing unit is suitable for both internal and external climbing. It can be removed in full and is compatible with other Liebherr tower cranes which means that operators only require one unit which can then be used at different sites.

In contrast to existing Liebherr Flat-Top cranes, the new NC-B models have a full jib element rather than the compact head. This is also designed for transporting in containers but costs less than a compact head. Depending on the size class of the auxiliary crane, the slewing platform, switchgear cabinet and cabin can also be assembled separately. The new concept includes a large number of time-tested elements from existing Liebherr top-slewing cranes, such as the LiConnect jib connection system. This enables the jib to be shortened or extended quickly and easily in steps of five metres.

Crane control system – simple, precise crane operation
Both the hoist and slewing gear and the trolley are controlled by a frequency converter. This makes infinite acceleration for hoisting, lowering and slewing possible, ensuring very precise crane operation. In addition, the cranes have limited starting currents due to the frequency converters which means that the required power units can be kept relatively small.

The time-tested Micromove fine positioning mode is included in the package as standard. The ABB operating-range limiting system and EMS electronic monitoring system are also available as options.

There are also other ways of upgrading apart from the control system. The options include slip ring assemblies for endless slewing, a remote control for easy control from the ground or an anemometer for safe crane operation.

Continue Reading
Liebherr-Werk Biberach GmbH
348
Share LinkedinTwitterFacebookEmailWhatsApp
Subscribe to our newsletter
Sign up here to get the latest news, updates and special offers delivered directly to your inbox.
You can unsubscribe at any time
Leave a comment