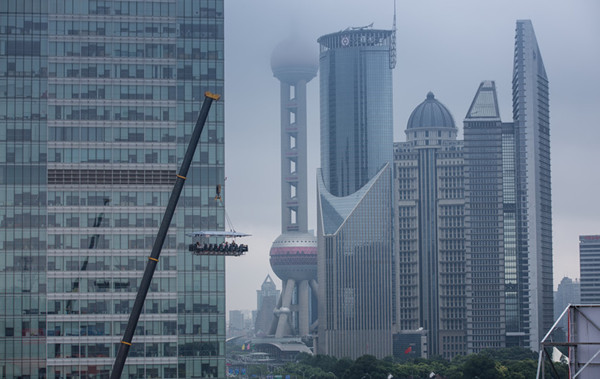 On June 27, 2014, an event creatively themed as “Dinner in the Sky” was formally launched at Four Seasons Hotel in Lujiazui (at Pudong New Area, Shanghai) as its debut in East Asia, following Belgium, France, Russia, US and Middle East. On the site stood a clean 300T all-terrain XCMG crane.

When dining, diners are tied to the safety seats with safety belts, and then hoisted to a height of 50 m. People at least 1.5 m tall are allowed, regardless of his/her age. Many onlookers exclaimed, “They are risking their lives to dine.” Reportedly, this grand banquet in the sky will be launched in other cities around the China.

As XCMG’s all-terrain crane stably lifted the dinner platform, people were crowded there, looking up and cheering. The first group of diners were later received the interview by the press.

According to the organizer, 22 diners of the first group together with two chefs of French cuisine were lifted to the sky on a customized metal platform that was connected to the crane behind through steel ropes. Guests made the booking in real name and take their seats accordingly, with a four-point safety belt fastened by servers for the sake of safety. It takes just two minutes to lift these dinners to a height of 50 m stably. The complete platform and steel ropes in this event were transported by air from Belgium.

An interviewed lady said excitedly: the lifting is more stable than elevator, and without the buildings in the distance as reference, I would hardly felt that I was being lifted. Even though the basic movements were restricted by the safety belt, except that my hands, feet and head can freely move, the seat could rotate by 180º, so I can appreciate the panoramic scenery of Shanghai: the two landmark buildings – Shanghai Tower and Oriental Pearl TV Tower stands by my side, and endless traffic on Century Avenue flows under my feet. Buildings at Shanghai World Financial Center are swathed in mist, and Shanghai Tower likes a mirage, with its upper part faintly discernible. It is fantabulous. For the first time I perceived another kind of beauty of this city.

The organizer is a businessman from Belgium. According to him, “Dinner in the Sky” is the most unique catering concept around the world, and under such a theme, a series of social dinner parties, TV live broadcasts and other services have been provided for those world-famous brands in Europe and America, bringing in considerable revenue for them. Before his visit to China, he has paid attention to XCMG’s products and mainly investigated several new large-tonnage products. It is the advanced technology and safety of XCMG’s products that appeal to his team a lot. So to speak, XCMG is the best choice for the “Dinner in the Sky” concerning its focus on brand.

Continue Reading
XCMG
349
Share LinkedinTwitterFacebookEmailWhatsApp
Subscribe to our newsletter
Sign up here to get the latest news, updates and special offers delivered directly to your inbox.
You can unsubscribe at any time
Leave a comment