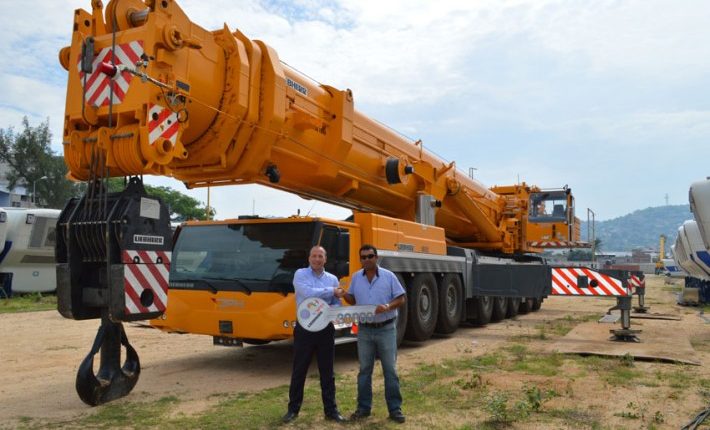 After the delivery of an LTM 1500-8.1, Liebherr-Werk Ehingen GmbH can now boast the proud total of 30,000 mobile cranes supplied to customers. The Liebherr 500-tonner was supplied to the Mexican company Grupo DPH, a crane and heavy load contractor. In reaching its decision to buy from Liebherr, one of the major factors for Grupo DPH was the existence of Liebherr Mexico S.de R.L, a sales and service subsidiary founded in 2013.

The LTM 1500-8.1 was handed over in the port of Salina Cruz in the south of Mexico. Grupo DPH has a warehouse at the port which currently acts as a distribution centre for the wind power plant manufacturer Vestas. At the present time the warehouse contains 130 generators and hubs for wind turbines. These will be shipped to wind farms throughout Mexico and also to other countries within Latin America. That meant that the first jobs were already waiting for the new LTM 1500-8.1 crane when it arrived. It shuttled between loading the generators at the distribution centre and a nearby wind farm where it erected tower segments weighing 68 tonnes. The next jobs for it include pre-assembly work for oil platforms.

Liebherr-Werk Ehingen GmbH was founded in 1969 and celebrated the delivery of its 20,000th crane in 2006. Since then 10,000 more Liebherr mobile cranes have been delivered to customers all over the world in less than eight years. With a current market share of around 48%, almost one in every two all-terrain cranes manufactured in the world comes from the Liebherr works in Ehingen. The 500-tonner from Liebherr has been on the market for 16 years and 450 units have already been supplied, establishing the model as the reference crane in the 500-tonne class.

Continue Reading
Liebherr-Werk Biberach GmbH
316
Share LinkedinTwitterFacebookEmailWhatsApp
Subscribe to our newsletter
Sign up here to get the latest news, updates and special offers delivered directly to your inbox.
You can unsubscribe at any time
Leave a comment