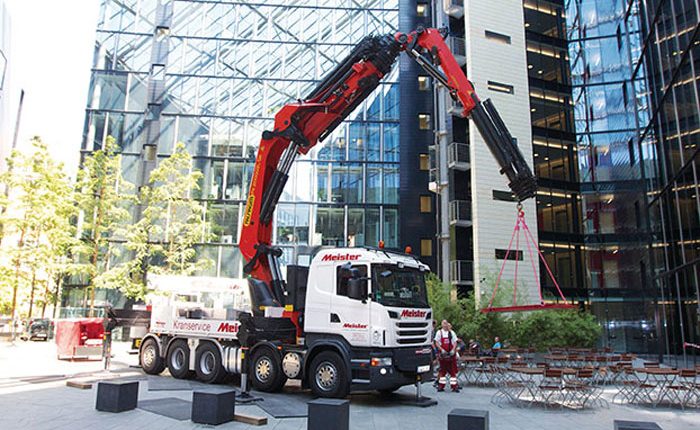 A clear view thanks to PALFINGER

450 kilogrammes of glass replacement in Frankfurt’s “Main Triangle” – with the help of PALFINGER cranes and an access platform, a pane of glass was recently replaced in the atrium roof of the “Main Triangle” at a height of 38 meters from inside the imposing building. So it was no longer necessary to divert traffic away from the front of the building. In use were a PK 200002 L SH, a PK 78002 SH and the WT 530 access platform.

Dynamic, functional and futuristic: the “Main Triangle” is considered an architectural highlight in the south of Frankfurt. The triangular complex consists of two building sections with a glass and steel atrium roof that spans the freely accessible courtyard. The only twin panoramic lift in the world to date is installed in this courtyard between the buildings. A connection bridge at 5th floor level joins the two building sections. An underground car park is located on two basement levels beneath the building complex.

Glass atrium roof as a challenge
The imposing atrium roof is covered with huge glass panes measuring 3.6 times 2.4 metres. On the first occasion that one of the panes was broken, all traffic on both lanes in front of the “Main Triangle” had to be diverted for a whole week in order for the pane to be replaced. There was an absolute desire to avoid a similar situation when replacing the pane this time around. This is how company Meister and its new PALFINGER PK 200002 L SH crane became involved.

Loader crane becomes high-tech assembly device
The works were carried out from inside the atrium itself. The truck with assembly crane drove over heavy steel plates into the interior of the building. This was to keep the point loads as low as possible, as the basement car park is only one floor below. After supporting and extending the crane, a 3D multi-axis glass manipulator developed by Meister was attached to the tip of the crane. Another PALFINGER crane, a PK 78002 SH, lifted the replacement pane of glass. At the same time, the façade-climbers began to loosen the old pane on the roof. The PK 200002 L SH assembly crane was extended and reached the defective pane at a height of 38 metres. The vacuum device fitted to the tip of the crane attached itself to the surface of the glass and the hydraulic thrust arms lifted the defective glass by 20 centimetres. A PALFINGER WT 530 access platform was used in parallel in order that the crane driver could control the crane precisely at a height of 38 metres. After setting down the defective 450 kilogramme pane, the new pane of glass was lifted from the ground and inserted very exactly.< Fast and cost-effective
“It was crucial in this job to work accurately and carefully. Even the smallest wrong movement and the new glass could have fallen. So we were able to get the job done quickly and cost-effectively, and so convince the building facility manager that it was right to work from the inside with top notch PALFINGER technology” reports professional operator Horst Gruber. Now visitors to the “Main Triangle” will once again enjoy an unobstructed view skywards.

Continue Reading
519
Share LinkedinTwitterFacebookEmailWhatsApp
Subscribe to our newsletter
Sign up here to get the latest news, updates and special offers delivered directly to your inbox.
You can unsubscribe at any time
Leave a comment