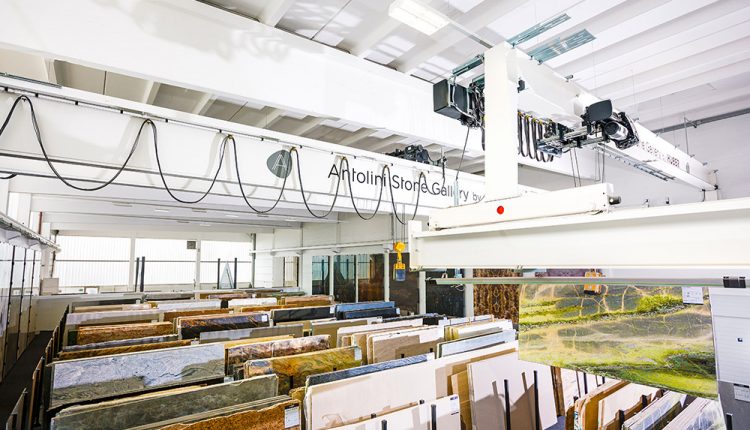 Art on a crane

The new Stahl crane runway at Huber Naturstein protrudes more than 3m into the wider part of the hall.

A single slab of natural stone, some looking like works of art, can weigh up to 500kg – colourful, with bold structures and fascinating surfaces. Antolini is a large Italian dealer in natural stones and the company Huber from Markt Schwaben near Munich its German partner. Huber has more than 800 different natural stones in stock. What seems like a normal warehouse from the outside resembles a well-designed showroom inside. Carpeting on the floor, music in the air and overhead two, indoor cranes – painted white, with black hoists, as designated by the Italian company – with “Antolini Stone Gallery by Huber” painted on the crane bridges.

To make better use of the space available in its hall and to exhibit slabs in the narrow area at the back of the building as well, Huber needed a second crane. The prerequisite for a sensible enlargement was an overlap area served by both cranes as slabs needed to be transferred from the existing crane in the wider, front part of the hall to the new, narrower crane. Stahl-und Kranbau Oeder, a crane-building partner of Stahl CraneSystems based in Southern Germany, extended the existing crane runway on the full-length side of the hall wall and constructed a new 27m long crane runway in the narrow part, protruding 3.3m into the wider part of the hall.

Rudolf Lang, managing director of Stahl-und Kranbau Oeder says, “The challenge here was that the overlapping part of the crane runway had to be a self-supporting structure so that Huber can use the area underneath for its exhibits without supports getting in the way.” The aisle in the overlap area simultaneously serves as connection to the adjacent hall, with rail cars being used to transport the stone slabs to it.

Wire rope hoists from the SH series from Stahl CraneSystems serve as lifting equipment on both crane bridges. The other crane components such as control equipment and crane end carriages also stem from the Künzelsau specialists for crane technology. The stone slabs are picked up with the help of strong grippers or – for particularly sensitive material – with slings. For Huber Naturstein, the investment was worthwhile: the new storage area obtained offers space for more than 40 additional materials, and the elegant, black-and-white crane merges seamlessly into the design of the hall as if it had always been there.

Continue Reading
448
Share LinkedinTwitterFacebookEmailWhatsApp
Subscribe to our newsletter
Sign up here to get the latest news, updates and special offers delivered directly to your inbox.
You can unsubscribe at any time
Leave a comment