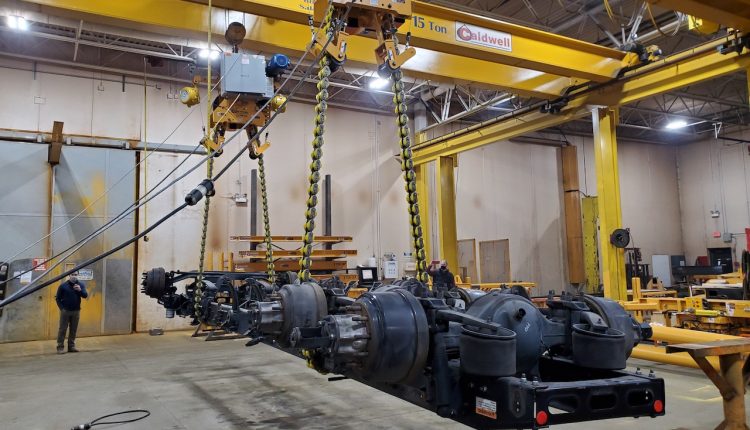 Caldwell partnered with distributors on the east and west coasts of the U.S. to deliver Posi-Turners to heavy truck manufacturers at either end of the country. The patented Posi-Turner, designed to rotate bulky and hard to handle objects during manufacture or assembly processes, is widely utilized throughout the automotive industry.

The standard version is targeted at anyone looking to make certain material handling processes more ergonomically efficient and safe while resulting in less product damage. The Posi-Turner is used by companies around the world to lift, suspend, rotate, and position hard-to-handle objects. However, they are frequently customized or modified for specific end-use requirements.

The optional patent-pending Auto-Leveler, for example, is an easy way to keep a load level during these rotations. The product can easily be added to the Posi-Turner at the time of the order or be field-mounted to existing units. The leveler automatically activates leveling adjustment. An independent drive system, meanwhile, combines with chain slings and two powered drive units suspended from a pair of cranes or hoists.

The Posi-Turner, which consistently represents a significant cost saving versus an alternative mechanical solution, recently combined with a chassis inversion system to lift heavy truck chassis that typically range in weight up to 30,000 lbs. The system encompasses the composite center of mass on the chassis making the turn-over process much more efficient. End users are reportedly prepared to invest up to $100k on such Posi-Turner systems.

Patrick Eytalis, application specialist at Caldwell, said: “A standard product is designed once and then manufactured in large quantities, often for a very long time. That type of product has its place—and Caldwell sells a lot of them—but the automotive industry presents different below-the-hook challenges that might be unique to a manufacturer or even a single production line. The Posi-Turner is a great product in its own right, but when customized to specific end-use requirements, it’s a game-changer.”

Also of note to automotive users, Caldwell and the RUD Group have united their sales and marketing activities in North America for material handling and lifting devices within a common organization. Products like the VRS, for example, are used to replace standard eyebolts that must be de-rated for angular lifting—a common requirement on production lines—offering a safer option and one with less risk of a lifting point failure. The VRS can be loaded in any direction and does not need to be de-rated even for a side lift.

Eytalis added: “Recent orders demonstrated our ability to combine the best available engineering expertise with a dealer network that extends to the point of use in the country’s most demanding end-user applications and marketplaces.”

Continue Reading
Automotive SectorLiftersLifting Solutions
118
Share LinkedinTwitterFacebookEmailWhatsApp
Subscribe to our newsletter
Sign up here to get the latest news, updates and special offers delivered directly to your inbox.
You can unsubscribe at any time