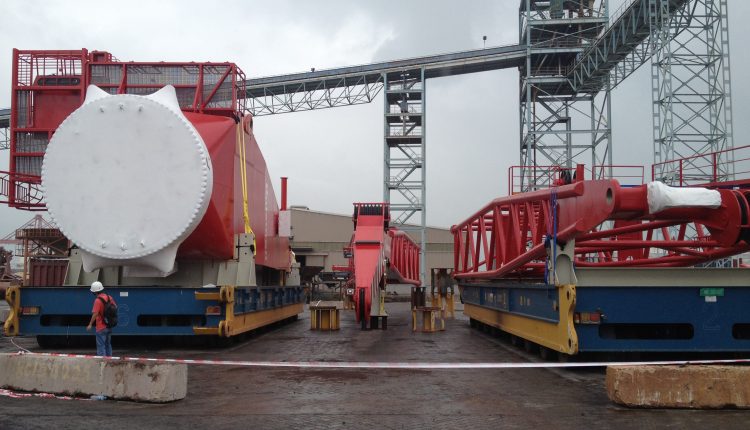 Tuscor Lloyds recently arranged for the charter of a Heavy Lift Vessel from Xaimen, China to Rotterdam, Netherlands the cargo was an urgently required offshore crane due to be fitted out on-board our clients jack up rig, the heaviest item weighing 126 metric tonnes and measuring over 23 Mtrs long 6.7 Mtrs wide and over 7 Mtrs high, the story is taken up by Nick Rodriguez (Project Manager at Tuscor Lloyds).

Along with the client several months prior to the shipment we put together various budgets and scenarios offering varied methods of carriage however when the cargo was finally ready for shipment the necessity for its arrival in Holland became paramount and our client favoured an option with a fast dedicated transit over a more economical route. The knowledge and experience we have in this sector put us at an advantage to provide our client with the service they wanted with a budget that suited them.

As with all shipments a lot of planning was needed and Tuscor Lloyds flew out two members of their project team to China to prepare the ground work prior to the vessels arrival. The team put together meetings with the cargo manufacture, port authorities, stevedores, supercargoes, vessel owners and marine surveyors putting everyone in the same room to discuss the total shipment from factory to ships hold. We always insist on shipments of this nature a clear communication channel is opened and everyone benefits in the long run it’s definitely worth the time invested. For this meeting we had the client come along towards the closing of the meeting it allows them to avoid the intrinsic bridge-building but allows them to review the final working plan and an opportunity to ask questions or challenge any key points of the plan.

To my surprise the client confined in me later on that they had never had this done for them before in fact on previous projects they had not even had the travelling support of their previous project forwarder. For me on a project this size and when you have a client investing large amounts of capital on a new piece of machinery it’s vital you are with them next to them even walking them through stage by stage ready to explain or answer any questions they may have. For me it’s a natural level of service we give but for the client it’s an vital “hand-holding exercise” we even stay in the same hotel as them so they can knock on our door at any time we really are available 24hrs on these jobs.

The loading itself took place late June in Southern China, Typhoon season was just underway and with the vessel due to report to the pilot station within a few hours the port was closed at the orders of the harbour master pending the threat of Typhoon Tamil. Now remember we mentioned earlier the client had opted for a fast dedicated charter and any time lost either to weather or port hold ups is going to give them a major headache, each day lost at sea is a day lost in the fit out of their new crane. Naturally the client becomes worried about the delay however there is little we can do to influence the weather so just what can you do in these circumstances? The only thing a good project forwarder can do is keep their client updated explain the situation the likelihood and scenarios that can play out and stay on top of the information and keep our ship top of the list to berth once the port opens and yes our ship was the first to berth and start working as soon as the port re-opened.

It’s always the little things that can make the difference just a simple appointment by ourselves to have a translator with us at all times proved essential for the ships Chief Mate as we put the translator at his disposal to assist with the shore-side labour. It took just under 24 hours from berthing to have the cargo loaded secured and the ship away but even at during this problems occur. It’s fair to say the shore-side labour in China was not the most regimented and prompt as you would expect in say North Europe so I doubled up as the ships agent and like a sheep dog rounded up the stray labour getting them back on the job when their skills were required. We simply don’t draw a line at who’s responsible for what our approach is look at everyone’s role and learn what they will be doing and try to act as a maestro bringing in the right people and skills at the right time and that I’m sure is what sets us aside from others in the market.

Continue Reading
featured
535
Share LinkedinTwitterFacebookEmailWhatsApp
Subscribe to our newsletter
Sign up here to get the latest news, updates and special offers delivered directly to your inbox.
You can unsubscribe at any time
Leave a comment