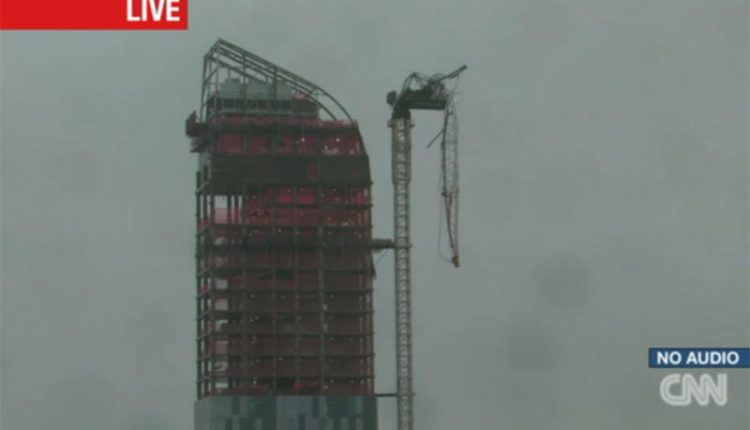 Climate models show that high winds storms could become frequent. Must be rethinked the out-of-service standards?

Do you remember? One year ago we saw on the news a Favelle Favco M440D luffing crane, dangling from partly built construction site in New York. Reason? due to high winds of sandy hurricane.
This week we saw how two luffer crane jibs collapsed in London, once again, following by hurricane force winds throughout UK.

Storms like that could become the new normal, because climate models show that big storms could even become frequent.

It’s not my opinion. Worth a read the report on extreme weather events, released recently by the UN’s Intergovernmental Panel on Climate Change (can be downloaded here) to read this:

—It is likely that the average maximum wind speed of tropical cyclones (also known as typhoons or hurricanes) will increase throughout the coming century. Okay, seems true that weather is switching to extreme events. And this mean, we have a real problem.

All we know basic rules with winds and cranes. Follow manufacturer’s instructions. Put the crane in weathervane position. Release brakes. Hook should be raised. Taking care in foundation design and construction and proper drainage, and use a lot of common sense.
Normally cranes are designed under international standards (DIN 15018/19, FEM 1001, 1004, EN 14439) with minimum in-service wind speeds.

Overall, winds higher than 36 – 42 m/s, suggestion is the crane should be out of service.

The rule EN 14439 (press release here) in force in 2010, is setting new standards according to a wind speed classification (A= lowest; F= biggest) according wind recurrence in certain time period. Most of Europe is covered by C Category.

Those are the basic rules, for a well known parameters, according a regional wind history. But, what if in the next future, wind storms recurrence is changing to higher, going beyond what is normal? Are we on the eve of new regulations?

Some questions:
Cranes will be designed under more stringent rules like offshore wind speeds?
Installation procedures should be executed with more engineering in adjacent areas?
Probably would be raised category from C, to D or E?
Should be done an awareness campaign among the crane owners?
Must be rethinked the out-of-service standards?

Seems clear that the effect of extreme weather on cranes is not to be taken lightly. Time will say.

Continue Reading
661
Share LinkedinTwitterFacebookEmailWhatsApp
Subscribe to our newsletter
Sign up here to get the latest news, updates and special offers delivered directly to your inbox.
You can unsubscribe at any time
Leave a comment