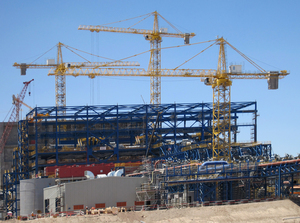 A total of three 1250 HC tower cranes are in use at the “Minera Sierra Gorda” copper mine. Two of these cranes are the 50-tonne version and the third is the 40-tonne version. All three cranes are mounted on foundation anchors. During the construction phase the cranes are used as classic tower cranes for effective load handling for the assembly of tanks, involving hoisting components weighing 14-17 tonnes. In the long term these three cranes will also be used as service and maintenance cranes at the mine.

The extreme geographical and climatic conditions not only present challenges to the workforce but also to the crane equipment. The high temperature differences of up to 40°C between night and day and the dust created by the arid desert climate produce extraordinary stresses. In addition Chile is one of the most earthquake-prone countries on Earth where earthquakes up to a magnitude of 5 are by no means a rarity. This means that all the cranes must comply with a Chilean standard which ensures that they are resistant to earthquakes.

Continue Reading
363
Share LinkedinTwitterFacebookEmailWhatsApp
Subscribe to our newsletter
Sign up here to get the latest news, updates and special offers delivered directly to your inbox.
You can unsubscribe at any time
Leave a comment