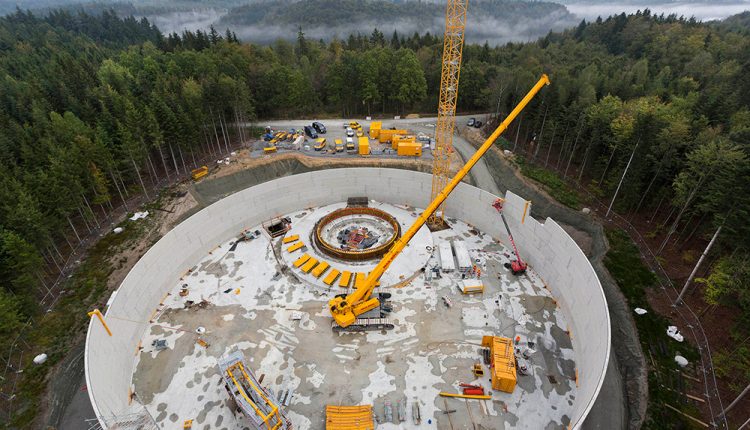 • Liebherr telescopic crawler crane ideal for the storage basin construction project due to its ability to move with a load
• A Liebherr mobile crane will hoist the LTR 1220 out of the site when the job has been completed
• Liebherr top-slewing cranes and an LTM 11200-9.1 mobile crane will work on the erection of the wind turbines which will be up to 240 metres high

For several months the Max Bögl Group has been working on a smart concept to generate and store natural electricity in the north-east of Baden-Württemberg. A modern pump accumulator power plant is being built near Schwäbisch Hall along with four wind turbines with a total height of up to 240 metres, making them among the tallest in the world. The special feature of this project is that each wind turbine will later be located in the centre of a circular water basin. Surplus energy can be used to pump water from the valley up into these water basins and then when electricity is then required it can be released to flow down to the power plant. The massive water basins are currently being constructed by a Liebherr LTR 1220 telescopic crawler crane.
The compact telescopic crane with crawler tracks is absolutely ideal for building the massive walls of these water basins as a result of its outstanding flexibility. Positioned in the centre of the circular foundation with an impressive diameter of 63 metres, the crane has a very small footprint. From there it only has to manoeuvre a few metres to be able to reach every point of the water basin wall. The LTR 1220 is also able to move with twelve tonne reinforced concrete components attached to it. This is a massive benefit which enables the construction work to progress quickly.

Liebherr LTR 1220 must be hoisted out of the water basins
The largest of the four basins, which will later be able to hold a total of 160,000 cubic metres of water, is made up of seven rings, each consisting of 28 concrete elements. Crane driver Michael Otto requires around one month with his LTR 1220 to assemble the total of around 200 curved wall segments which make up one of the basins. When the wall of a so-called passive basin has been completed, however, the crawler crane will be unable to drive out of it. The LTR 1220 will then have to be hoisted over the 11 to 15 metre high wall out of the water basin by a Liebherr mobile crane after its crawler tracks have been removed.

The project description prepared by Max Bögl Wind AG lists a few superlatives which this efficient method of electricity generation and storage will later feature. For example, the four wind turbines with rotor diameters of 137 metres and a hub height of 180 metres will be among the tallest in the world. In addition to crawler and mobile cranes and a wide range of Liebherr machines from the Earthmoving Division, Liebherr top-slewing cranes are also operating on the site, including two new 280 EC-H 16 cranes. The 40 metre high storage towers will be built by a Liebherr LTM 11200-9.1 mobile crane. These towers, which rise out of the passive basins and can also hold water, will be used as foundations for the wind turbines. The turbines are being erected by a Liebherr 630 EC-H 70 top-slewing crane. This wind turbine crane will then also be erected at a height of 40 metres on the tower in the active basin which will enable it to reach an impressive hook height of 191 metres above ground level.

Continue Reading
Liebherr-Werk Biberach GmbH
331
Share LinkedinTwitterFacebookEmailWhatsApp
Subscribe to our newsletter
Sign up here to get the latest news, updates and special offers delivered directly to your inbox.
You can unsubscribe at any time
Leave a comment