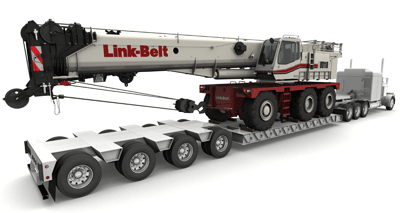 Nearly nine years after beginning the journey of producing its own formed boom, Link-Belt Cranes has produced its 10,000th boom, which will be installed on a 140-ton TCC-1400 telescopic-boom crawler crane.

After purchasing formed boom sections from an overseas supplier for several years, Link-Belt made the decision to fabricate its own boom sections for economic and delivery reasons.

A small team of engineers and technicians developed all the processes required to cut materials, precision form the plates, weld the shell pieces together, inspect, and complete the weldment. The team specified and/or designed the cutting, bending, welding, inspection, and material handling production equipment. The majority of the fabrication of this production equipment was done in-house by talented fabricators and welders. Automated controls and computer programs were also developed in-house to support the flow of the fabrication process, to ensure repeatability and quality, and to aid the operators of the equipment.

In 2014, Sumitomo Heavy Industries (TYO: 6302), Link-Belt Cranes’ parent-company, named Link-Belt the Gold Prize Winner of its President’s Award in the area of quality and innovation for the equipment designed and built in house that produce high quality boom sections. This project took years of research, design, and fabrication with a cross functional team dedicated to produce a high quality manufacturing process second to none in the crane business. Reliability of the manufacturing equipment is designed in and maintained through a preventive maintenance program.

Continue Reading
Link-Belt
723
Share LinkedinTwitterFacebookEmailWhatsApp
Subscribe to our newsletter
Sign up here to get the latest news, updates and special offers delivered directly to your inbox.
You can unsubscribe at any time
Leave a comment