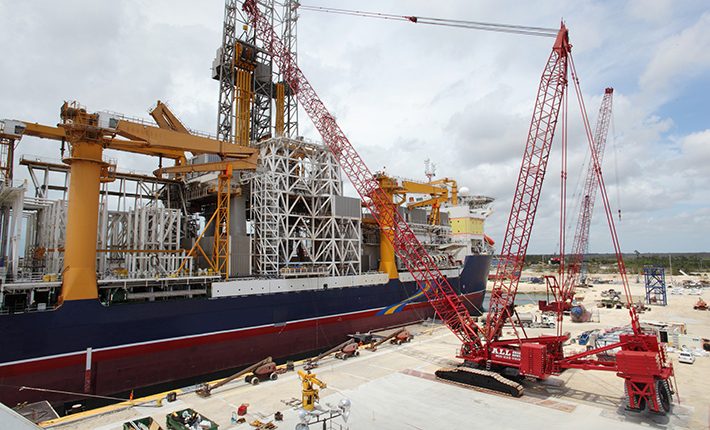 A project to replace several integral parts of a large shipping vessel presented the need for a crane with above average reach and capacity, but that could also be transported well over land and water. ALL Crane Rental of Florida, a member of the ALL Family of Companies, called on one of the larger cranes in its fleet to get the job done: the Manitowoc 18000 crawler crane.

Some 80 miles off the coast of Florida at the Grand Bahama Shipyard, a ship arrived for repairs that would require 45 days of around-the-clock efforts. All eight of its massive drill head sheaves would need to be replaced.

The first job would require the Manitowoc 18000 to lift out the worn drill head sheaves, or pulleys, at the top of the drilling tower and hoist new ones into place. ALL set up the Manitowoc 18000 with its wheeled MAX-ER attachment, which boosted its capacity to 825 USt, well over the required capacity.

The boom was erected at 340 ft for the lifts. Each sheave weighed approximately 65 USt, but several loads had higher weights. For lifts of 75 USt, the crane was configured at its longest counterweight radius of 59 ft and wheeled counterweight of 386 USt – the lift radius for these loads measured 204 ft. For the heaviest loads of 135.3 USt, the crane was maneuvered to lift from a 152 ft radius.

“Planning the lifts alone took four weeks,” said Mike Weaver, special projects manager at ALL Crane Rental of Florida. “We used ALL’s 3D Lift Plan software to simulate these lifts and come up with the ideal crane to use. We chose the Manitowoc 18000 for its efficiency and suitability for this project.”
The Manitowoc 18000 has a capacity of 660 USt, which can be raised to 825 USt with the MAX-ER attachment. With a luffing jib attachment, the crane’s boom can reach to 520 ft. The crane is known for its ideal balance between brute strength and ease of mobility—the latter of which was crucial to the success of the project. Getting the crane to the job site was no easy task.
The crane was mobilized from ALL’s Atlanta branch. The parts were loaded onto trucks, and then shipped via ferry to the dock in Freeport, Bahamas. The entire process took some 30 days. As ALL owns its own fleet of trucking tractors and trailers, the company was able to mobilize the crane quickly at lower cost than using a third-party transit service.

“It’s a key advantage for the ALL Family of Companies over using third-party trucking firms,” Weaver explained. “We’re in charge of our own schedule, so we don’t have to worry about potential delays without outside firms that we have no control over.”

The project was completed with ALL reporting that the Manitowoc 18000 worked flawlessly on the job site. The ship is now back in service, thanks to the precision performance of ALL and its Manitowoc 18000.

Continue Reading
240
Share LinkedinTwitterFacebookEmailWhatsApp
Subscribe to our newsletter
Sign up here to get the latest news, updates and special offers delivered directly to your inbox.
You can unsubscribe at any time
Leave a comment