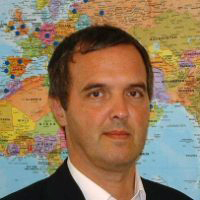 Meet Frank Crombe, witness of most of the history of the world of tower cranes

Meet Frank Crombe, witness of most of the history of the world of tower cranes, long carreer for a total of 28 years in Tower Crane Business, started in the end of 70th like a junior sales representative in the Export Depertment at Potain Group.

Cranesy: What were your first steps in the crane sector?
Frank Crombe: I graduated as Commercial Engineer from the MTI institute of Paris specialized in International trade then went to England and to the University Germany
for further studies before joining in the late 70’s Potain at that time the world leader in Tower Cranes. As a junior Sales Representative I was in charge
in the Export department of all the Far East markets from Korea to Singapour. A tremendous challenge for a young man! At that time, tower cranes were still
relatively unknown in the Far East as it was a European product and man power was cheap there. POTAIN was a pioneer in these markets and to many in these countries a synonym for Tower Crane.
It has been an incredible experience for me especially in China where I had the privilege in the early 80’s to co-sign the first Tower Crane Transfer of technology contract with China we won against Liebherr.
Contract which has changed, a decade later, the world of Tower Crane tremendously. Spite this success, our team being highly criticized inside Potain’s management I chose to quite Potain for other horizons.
By an extraordinary hazard I came back some years later to the Tower Crane business becoming the International Sales Manager of Peiner in Germany.
Within 10 years the export turnover increased from 10% to 90% of the total turnover. Here also one of our main achievement was to promote Tower Cranes in the US traditionally using Mobile Cranes for building construction.
Peiner was at that time a leading manufacturer of Heavy Tower Cranes and Luffing Cranes perfectly adapted for that market and later on to some Asian Markets.
Unfortunatly Peiner was acquired together with Comedil by Terex which 2 years later closed the factory in Germany.
Being in conflict with the Terex management and foreseeing the doom of this fine company I joined Arcomet.
Here again Fate changed my career as Arcomet direction asked me to open my own company in Luxembourg for Consultancy in Tower Cranes International Business.
I have managed this company up to 2010 working for for different companies in Belgium and in the Netherlands.
I see myself very fortunate as all along my career I have been the witness of most of the history of the world of Tower crane: I have met most of the extraordinary
personalities who have marked the history of Tower Cranes, visited most of the Tower factories in the world: France, Germany, Italy, Spain, Korea, Portugal, Sweden,
China… both for Self erecting crane, tower cranes and luffing cranes and travelled the world marketing these products.

C.: Who/ what inspired you or inspire you every day?
F.C.: The philosopher and writer Paolo Coehlo inspired me every day. He summarises in an easy and beautiful way (to read) the essential teachings of many modern technics such as NLP,
or of all these writers, gurus, specialists etc… who offer seminars on how to improve your skills or
to be happy and successful in life. In a more practical, business way, Fil Filipov from Terex, who I met several time, has also have inspired me when working in the Tower Crane business.

C.: If you have to form a TEAM composed by 10 person, what kind of personal qualities of members you will look before assuming the people?
F.C.: I believe that we are living more and more in an highly specialized world. I believe also in a world of system where every parts made a whole.
Thus I would choose highly specialized people able to fit in the team and able to communicate with others while doing their specific tasks.
Important also is their motivation, i.e. not waiting orders but being able to see above their horizon. Honesty is also of essence.

C.: You have several years of work experience behind you, what’s the toughest decision you ever had to make in your entire career?
F.C.: To quit Terex Peiner GmbH in Germany. It was a very healthy company, profitable, small but efficient, with an excellent technology and reputation.
I have fought to keep it alive, went as far as to criticize my own direction and even met the Top Direction of Terex
in the US but I have not been to stop Terex closing this company after 2 years of ownership putting 250 workers jobless.

C.: In your opinion, what are the most common mistakes today’s entrepreneurs make?
F.C.: To privilege the short term to the long term (both are equally important), to forget that the value of a company is the value of its workers,
to forget that we work now in a global world and last to be flexible in their own organization and way of doing business.

C.: Your favorite author/authors?
F.C.: Paolo Coehlo, Frank Herbert, Jack Vance, Khaled Hosseini to name a few… But I go every week to the library.
Thus I like a wide range of authors and genres!

C.: Your point of view of Tower Crane Market in Belgium today?
F.C.: Belgium is a very small country but multi-languages. They were the first to see that Tower Crane is a. Becoming mainly a rental market, but that you should not limit yourselves in your own market.
I have a lot of admiration to the Theyskens brothers who were the first to understand that Europe in an United States of countries and consequently have rented their fleet of Tower Cranes all over Europe
and later even worldwide. In less than a decade they have transformed a small family business almost bankrupt to the largest rental tower cranes company in the world. What an achievement!
I was part of the team therefore I know it.

Short questions:
Cranesy: What qualities are needed to run / manage a company?
Frank Crombe: Be prepared to work hard, listen to the market, listen to your employees, prioritize tasks, manage skillfully your workload.

C.: Tips for young people who want to achieve success at work?
F.C.: To underestimate its own capacities, to have too high expectation and to stop learning.

C.: What’s your strong point?
F.C.: Being flexible and open to the world.

C.: What are your hobbies?
F.C.: Travelling, outdoor activities, philosophizing.

Continue Reading
Liebherr-Werk Biberach GmbHManitowocTerex Corporation
586
Share LinkedinTwitterFacebookEmailWhatsApp
Subscribe to our newsletter
Sign up here to get the latest news, updates and special offers delivered directly to your inbox.
You can unsubscribe at any time
Leave a comment