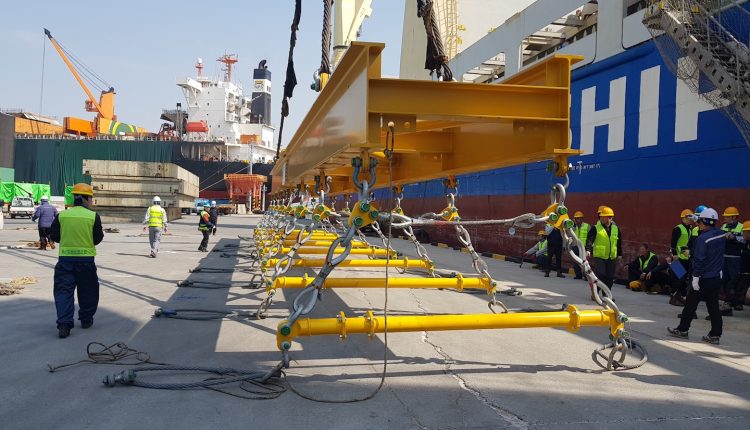 Siemens HTT supplied two vertical Benson-type Heat Recovery Steam Generators (or HRSGs), with 28 modules each. They first needed to be lifted aboard a vessel for transportation to the 1,300MW South Bangkok phase one combined-cycle power plant located 20km south of Bangkok in the Samut Prakan province, Thailand. Siemens is part of a consortium serving the $550m project, an initiative of the Government of Thailand’s Power Development Plan, which aims to improve the reliability of the country’s power system and introduce clean power generation facilities.

Dennis de Jong, supply manager for Siemens HTT, explained that the HRSG-modules are the largest the company has ever constructed. This presented a rigging challenge given the dimensions involved, principally because slings would have needed to be rigged at an acute angle from an existing lifting beam to connect to the load’s pick points. The solution was based on utilising the existing beam, beneath which eight 3.25m-long standard spreader beams would be rigged at a 90-degree angle to the larger beam, in essence to widen the below-the-hook system.

De Jong said: “Alternative lifting solutions also wouldn’t have been able to handle the weight of the generators so we had to be innovative and combine our knowledge about the load[s] with Modulift’s below-the-hook expertise. The result was a mix of the old and the new with an existing beam rigged above the new beams beneath. The use of wire rope slings was also carefully planned to ensure maximum safety and efficiency.”

Chris Schwab, account executive at Modulift, said: “Siemens wanted to utilise the same pick points so we were steered towards the eight-beam solution; we added another layer to the rig. Above each beam, a sling was rigged at either end at a 55-degree angle to a [18t SWL] tie-plate; between the plates, a 17t [SWL] tie grommet sling provided stability and attached our rig to their beam.” Schwab recalls that from the top of the MOD beam to the load was approx. 1.6m. “Once we knew the specs of the load and the location of the pick points, we were able to visualise the rig,” he added.

Steam is an essential element in the energy supply system. As a primary energy source, it fulfills many important functions, whether it’s used to operate a turbine, as process steam for use in industry, or for district heating. Therefore, HRSGs are important components of many power plants: they substantially increase a plant’s overall efficiency, and help to minimise the fuel costs.

Continue Reading
Below the HookLifting ModulesModulift
705
Share LinkedinTwitterFacebookEmailWhatsApp
Subscribe to our newsletter
Sign up here to get the latest news, updates and special offers delivered directly to your inbox.
You can unsubscribe at any time