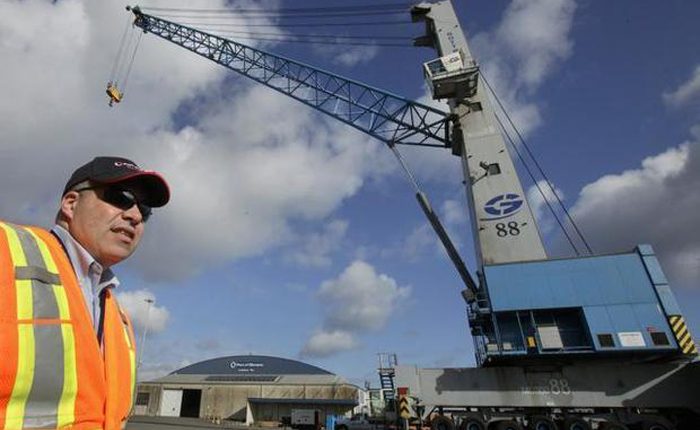 If you’ve looked in the direction of the Port of Olympia in recent weeks, you’ve seen the port’s new mobile harbor crane. Port officials say it’s the right equipment and right marketing tool to attract a variety of cargo to the marine terminal.

The port paid $3.2 million for the used crane, which officially is known as a 2005 Gottwald. It was delivered to the port from Antwerp, Belgium — it arrived in pieces aboard the Star Louisiana in early March. The next several weeks were spent on assembly, tests and certification, marine terminal director Len Faucher said Tuesday.

Training to operate the crane is up next, followed by attracting a new cargo to the port, he said. The crane has a 124-foot tower and a 173-foot boom and can lift 140 metric tons, Faucher said.

“It’s probably as versatile a crane as I’ve ever seen,” said Robert Rose on Tuesday. Rose is a business agent with the ILWU, Local 47, which loads and unloads cargo at the port.

The cranes were sold for scrap last year and recycled in British Columbia.

Rose said the previous cranes were strictly for containers, but the Gottwald can handle containers, with the use of a spreader, as well as bulk and heavy-lift cargoes.

Examples of heavy lift cargoes include wind turbines and bridge components, he said.

The port largely deals in bulk cargoes, such as the raw logs it exports to Asia or the ceramic proppants — also known as fracking sand — that it imports from China. The proppants arrive in “super sacks” and are dumped into covered rail cars, which transport the material to the Bakken oil fields of North Dakota.

Although the crane is set to lift new cargo, it could also fill in if the shipboard cranes that load and unload logs and proppants failed, Faucher said.

But will the new crane attract cargo? That remains to be seen, but Faucher said the marketing effort is underway, including a recent business trip to Houston to meet with shipping lines and freight forwarders. Local business trips, including to Canada, are planned, plus the port is marketing the crane through trade publications, he said.

Continue Reading
328
Share LinkedinTwitterFacebookEmailWhatsApp
Subscribe to our newsletter
Sign up here to get the latest news, updates and special offers delivered directly to your inbox.
You can unsubscribe at any time
Leave a comment