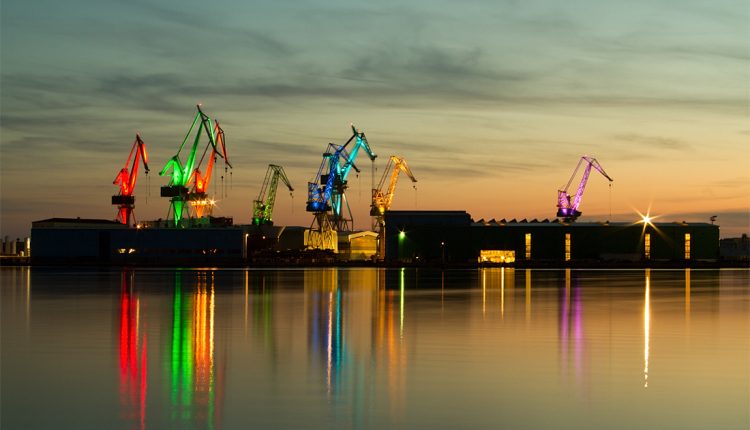 The light performance and installation, titled Lighting Giants, is the latest attraction in Pula, Croatia. Debuting at last month’s Visualia festival, the piece dramatically transforms monumental metal shipping machinery into elegant, birdlike pieces of art through the use of well-timed bursts of colored light. Illuminated by LED lights, the cranes bear a remarkable resemblance to origami paper cranes, and seem to dance against the night sky.

The spotlights, which weigh 90 pounds, each contain 62 pieces of LED chips that can be programmed into over 16,000 combinations of color and brightness. The flickering show includes a rainbow of red, green, blue, yellow, purple, and other shades.
The piece is set first to John William’s “Wild Signals,” part of his score for Close Encounters of the Third Kind, before transitioning into music from Daft Punk and Sergei Prokofiev’s “Dance of the Knights.”

It took 15 years for lighting designer Dean Skira to bring his artistic vision to life, but the city’s Uljanik shipyard, which dates to 1856, is now a tourist destination in its own right.
The effect is quite similar to that of a video included in “Italian Futurism, 1909–1944: Reconstructing the Universe,” on view at New York’s Guggenheim Museum through September 1. That short film is based on an avant-garde stage lighting production devised but never realized by Giacoma Ball for Igor Stravinsky’s “Fireworks (Feu d’artifice).”

Ball’s performance piece, essentially an antiques laser show, featured only a set and lighting effects, without any human actors or dancers. Unfortunately, it was cancelled due to labor disputes and was only shown in a single dress rehearsal . Now, nearly a century later, Matt Champer, Kana Otaki, Franco Sciannameo, and Don Marinelli of Carnegie Mellon have teamed up to create a digital rendering of what it would have looked like using Ball’s lighting notes and drawings of the set.

Continue Reading
310
Share LinkedinTwitterFacebookEmailWhatsApp
Subscribe to our newsletter
Sign up here to get the latest news, updates and special offers delivered directly to your inbox.
You can unsubscribe at any time
Leave a comment