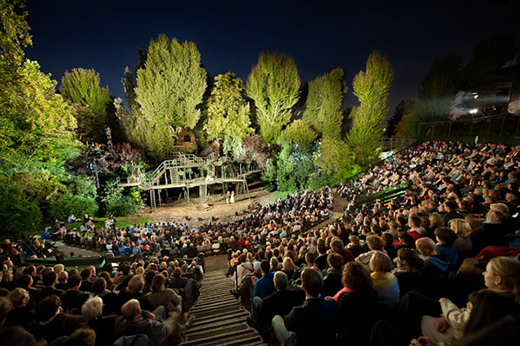 Disney have recently announced an all-star Hollywood cast for their movie adaptation of “Into The Woods”, but did you know that a UNIC mini crane helped create a fantasy woodland theatre set for the Olivier Award winning production of the Stephen Sondheim musical in Regents Park, London?

A UNIC URW-295 mini spider crane was hired out one Summer to help construct the outdoor stage which was designed by award winning set designed Soutra Gilmour for this open air theatre production. The stage hosted a six week run of the show, with a cast playing over 20 fairytale characters from Brothers Grimm stories, including Little Red Riding Hood, Jack & The Beanstalk, Rapunzel and Cinderella.

The 2.9 tonne capacity UNIC mini crane lifted sections of the steel construction into position so they could be welded together. Take a look at this BBC clip of directors Timothy Sheader and Liam Steel walking around the set and showing the UNIC mini crane in action.

Continue Reading
874
Share LinkedinTwitterFacebookEmailWhatsApp
Subscribe to our newsletter
Sign up here to get the latest news, updates and special offers delivered directly to your inbox.
You can unsubscribe at any time
Leave a comment