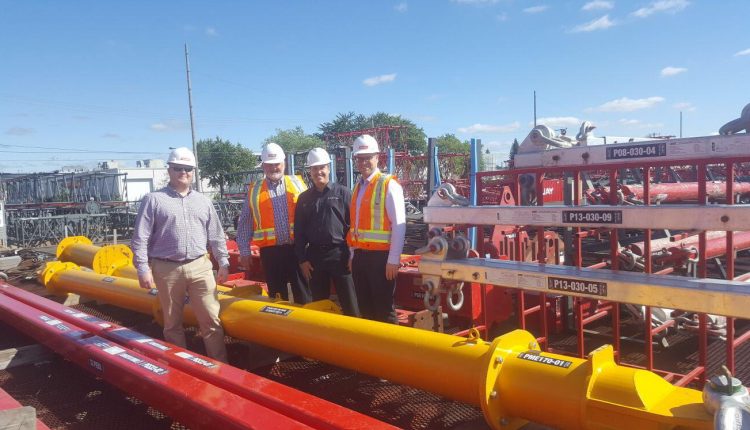 A Modulift spreader beam was used beneath the hook of the largest mobile crane manufactured in serial production in the world, at the Turcot Interchange, a three-level stack freeway project in Quebec, Canada.

The Turcot Interchange is a hub for road traffic in the Montréal area, interconnecting highways 15, 20 and 720, in addition to facilitating access to the Champlain Bridge. It is also an essential road link between Montreal-Pierre-Elliott Trudeau airport and downtown Montréal. A crucial phase of the project was installation of two girders, weighing 200,000 lbs. apiece.

The LTM 11200-9.1, which worked at a 95 ft. radius, combined with a 300t capacity Sany SCC8300 crawler crane, but not in tandem lift, as such. Below the hook of the crawler crane a custom beam lifted the second girder and, once connection to the other one was complete, both cranes could release the load simultaneously. Synthetic slings completed the rigs on both cranes.

Luke Habza, national sales and business development at Equipment Corps, said: “We frequently supply lifting and rigging gear to the project but this was a standout lifting operation. Combined with the MOD 110H beam, use of the Liebherr amounted to thousands of dollars-worth of savings to the customer, who didn’t need to mobilise another crawler crane, as would be typical for this kind of application.”

The Turcot Interchange, Quebec’s largest and third busiest, was built in 1967 and the structures were nearing the end of their useful life. The project continues.

Continue Reading
Below the HookHeavy LiftingLiebherr-Werk Ehingen GmbH
729
Share LinkedinTwitterFacebookEmailWhatsApp
Subscribe to our newsletter
Sign up here to get the latest news, updates and special offers delivered directly to your inbox.
You can unsubscribe at any time