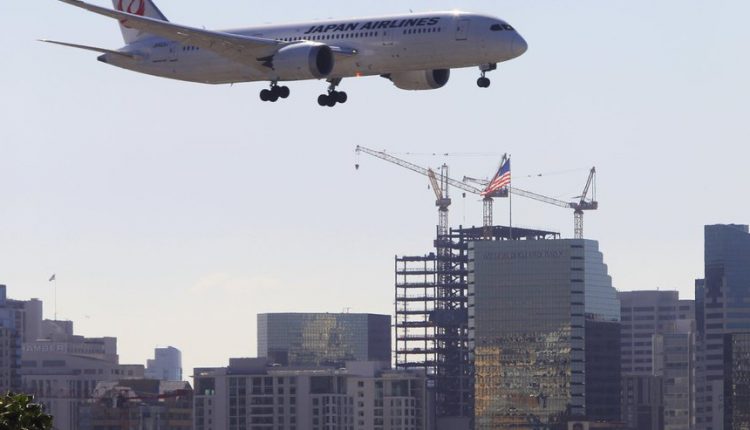 The San Diego County Regional Airport Authority filed a lawsuit Tuesday seeking removal of three towering cranes in downtown San Diego that the authority says could cause a plane crash or clog regional air traffic by forcing diversion of many flights.

The roughly 650-foot-tall cranes, which contractors are using to build a $500 million downtown courthouse expansion, significantly exceed the 472-foot limit the Federal Aviation Administration prescribed last summer for cranes working on the project.

In addition, the FAA only approved one crane — not three — and required that crane be equipped with a large flag for daytime visibility and red lights at night, conditions the lawsuit claims that the contractors have failed to meet.

The presence of the cranes prompted the FAA last Thursday to begin requiring pilots approaching from the east to visually identify Lindbergh Field’s single runway from a farther distance and a higher altitude.

The lawsuit says that during inclement weather, such as the El Nino winter storms many forecasters are predicting, the FAA’s policy change will cause many flights to be canceled or diverted away from San Diego to Ontario or Los Angeles because pilots won’t be able to see the runway through clouds.

“If the cranes are not lowered and the current constraints on landing minimums remain in place, the result will be substantial cancellations and diversions from the airport during inclement weather and the acute disruption of civil aviation throughout the Southern California region, if not the nation,” the suit says.

The suit says the potential for a plane crash is an even greater concern, contending that the cranes “pose a serious threat to the health and safety” of county residents and tourists by constraining “landings, takeoffs and maneuvering of aircrafts.”

Bret Lobner, the airport authority’s general counsel, said Wednesday that preventing crashes is the agency’s highest priority and a key motivation for the lawsuit.

Lobner said he hopes the airport authority can work the situation out with the defendants in the lawsuit: the Judicial Council of California, which is building the 22-story courthouse expansion on B Street; general contractor Rudolph and Sletten; Brewer Crane and Rigging; and architects Skidmore, Owings and Merrill.

A spokesman for the Judicial Council said Wednesday that his agency was also optimistic.

“We’re certain the issue will be resolved quite soon,” said the spokesman, Peter Allen. “The well-regarded contractors, Rudolph and Sletten, are being responsive to the situation.”

The other defendants didn’t respond immediately to requests for comment from The San Diego Union-Tribune.

A hearing has been scheduled for 8:30 a.m. Thursday before Superior Court Judge Joel Wohlfeil on a temporary restraining order the lawsuit seeks.

The lawsuit, filed on behalf of the airport authority by attorney William Pate, asks that the contractors remove the cranes, or potentially maintain one crane at the height prescribed by the FAA — 472 feet above the ground, which is 511 feet above sea level.

The lawsuit says Brewer Crane and Rigging told airport authority officials last week that the company sought on Oct. 6 an FAA waiver allowing the cranes to be as tall as 695 feet. The FAA hasn’t yet responded to that request, according to the suit.

The city of San Diego and the state Department of Transportation are also named as defendants because they have regulatory authority that could be affected by the lawsuit. They both also declined to comment.

The cranes could be in place as long as another year or more, because the courthouse project isn’t scheduled for completion until October 2016. Construction of the project, a replacement for the older portion of the downtown courthouse, began in March 2014.

The project is bordered by B, C, Union and State streets, less than a mile south of the airport’s eastern approach for landings.

The lawsuit stresses that Lindbergh Field is the busiest single-runway airport in the nation and the second busiest in the world, after Gatwick in London. In 2014, there was an average of 525 flights per day and 51,000 passengers.

Last week’s FAA policy change requires pilots approaching from the east to switch from instrument navigation to visual navigation earlier and at a higher altitude because of the cranes.

They were previously required to switch when they got three-quarters of a mile away and they could be at 258 feet altitude. Now they must switch at a mile and a half and be at 461 feet altitude.

Continue Reading
467
Share LinkedinTwitterFacebookEmailWhatsApp
Subscribe to our newsletter
Sign up here to get the latest news, updates and special offers delivered directly to your inbox.
You can unsubscribe at any time
Leave a comment