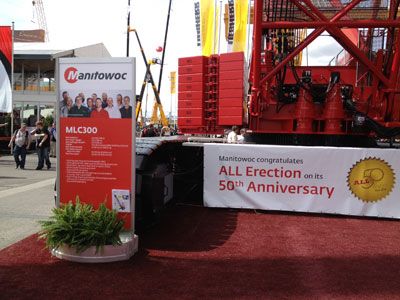 National crane supplier All Erection & Crane Rental Corp. has purchased 10 Manitowoc MLC300 crawler cranes, and Manitowoc has sold 50 crawlers in its next-generation crane lineup, according to sources at the companies.

The 330-ton crane, which debuts at the CONEXPO-CON/AGG show in Las Vegas, comes with Manitowoc’s next-generation Variable Position Counterweight (VPC). Actuated by rack and pinion, the patented lifting technology responds to the load on the hook by sliding the counterweights back and forth as needed to maximize lifting capacity and reduce overall tail swing.
“It’s going to change the market,” said Kristopher Liptak, who works in All Erection’s crawler division and discussed the sale with ENR on the evening of March 3, one day before the giant equipment show opened its doors.

Manitowoc, which introduced VPC on its 2,500-ton model 31000 at CONEXPO in 2008, has also integrated the VPC technology on its new MLC650, a 725-ton crawler crane that also debuts at this year’s show.
Prices for both machines have not been disclosed, but Manitowoc is said to have sold 50 of the new VPC machines so far. At Manitowoc’s booth is an MLC300 with All Erection’s logo, while an MLC650 wears Kiewit’s yellow-and-black paint scheme.

The cost for the added technology was reasonable, Liptak noted, estimating that each MLC300 his company purchased came at about a 10% to 15% premium over the Manitowoc 2250, an older-generation crawler crane in the same capacity class that retails for over $2 million.

Manitowoc’s VPC technology enables cranes to do more with less. For example, the crane requires fewer overall counterweights, reducing the high cost of shipping the heavy blocks of metal to jobsites.

“Counterweights are one of the simplest parts of the crane, and they are one of the most difficult things to move around,” Liptak said. Due to weight restrictions, a single highway truck is often only able to carry one counterweight at a time, he added.
Load distribution on the ground also is improved, reducing the amount of infrastructure needed to keep the crane stable underfoot.

“On a 2250, all your deep intense pressure is on the toes of your tracks,” Liptak explained. “Now, it is spread out across the tracks.” The cranes can also be had with an extension arm called VPC-MAX that hangs the counterweight off the back of the rigs for increased lifting capacity.

Because the counterweight on VPC-MAX equipped cranes floats over the ground, they require one-tenth the area of ground preparation than other models that use conventional counterweights, Manitowoc estimates.
Cranes in the 300-ton to 800-ton capacity range are becoming more competitive as heavy industrial projects, such as coal plants converting to natural gas, are active. All Erection, which celebrates its 50th year in business in 2014, will soon have at least 10 new crawler cranes ready to field.

“We’re very optimistic about this year,” Liptak said. “The market is busy.”

Continue Reading
353
Share LinkedinTwitterFacebookEmailWhatsApp
Subscribe to our newsletter
Sign up here to get the latest news, updates and special offers delivered directly to your inbox.
You can unsubscribe at any time
Leave a comment