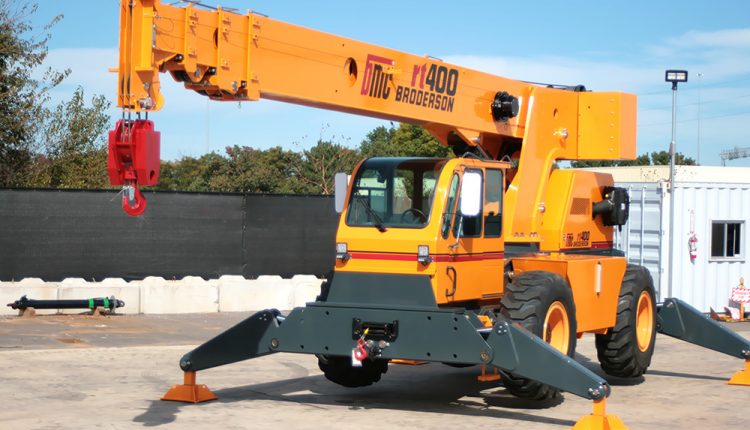 Broderson Plans a Broad Range of Introductions at ConExpo

Broderson Manufacturing Corp. opened its doors in 1973, and soon earned a reputation for producing durable, dependable, and versatile equipment. At ConExpo-Con/Agg, the Lenexa, Kan.-based company will roll out four new machines, making it the largest product introduction in its history. The models include two rough-terrain cranes, the RT400 and the RT500, and two carry-deck cranes, the IC100 and IC600.

The RT400 is a new 20-ton capacity, cab-down rough-terrain crane, which is currently in production and the first unit will be delivered at ConExpo. Early multi-unit orders are already in the backlog from Bigge Crane and other major customers.

The crane features 68 ft. of main boom, a Cummins QSB 4.5-liter Tier 4 Final engine, and an optional 20-ft. boom extension. With the Galion 150 out of production for 15 years, Jeff Bust, CEO of Broderson, says, “We pointed at that particular market segment because those units are coming up for a replacement.”

The RT400, which complements the 15-ton Broderson RT300 RT crane, offers rental customers a bigger, faster machine with a longer reach. Additionally, the oil and gas industry has been using the Galion 150 in many plants, and the RT400’s footprint is nearly the same as the 15-ton Galion. With a 20-ton capacity, the RT400 ensures that the lifts generally being made in these locations are at 75% or below its rated capacity.

At this capacity size, Bust says operators expect a more ergonomic cab, and the spacious, easily accessible cab is a highlight of the RT400. With the newly designed cab, operators can expect reduced noise and integrally designed air conditioning as standard. The pilot-operated hydraulic system moves the heat and noise associated with older direct mechanical-controlled hydraulic systems out of the cab, and it offers precise control that is simple to maintain and service.

“One of the things we keyed in on was we wanted to make sure that there’s enough hydraulic pump capacity to be able to perform multifunctions with the machine,” Bust says. “If you only have so much flow, the crane will favor one function over another, and the other functions will slow down.” The RT400’s 103-gpm, dual variable drive piston pump has nearly twice the hydraulic capacity of older competitive model cranes. In the chance that there is a failure, the redundant pump allows for the crane to operate back into a safe condition.

A 25-ton-capacity, cab-down RT also will be introduced at ConExpo. While the RT500 is similar to its sibling machine in size and shares the same Cummins Tier 4 Final diesel engine and state-of-the-art rated capacity limiter, there are some significant differences. The RT500 has a longer 76-ft., four-section boom, and it is designed with a joystick-operated, electronic-over-hydraulic control system that fits operator preferences in this size of crane.

“We wanted to have as much commonality between the components in the two machines, and the first thing we started with was the structure and drivetrain components,” says Eric Slocombe, director of engineering. “We took the approach on the structure to minimize the differences. We chose to size the prime chassis outriggers and the components that would suffice for the 25-ton capacity rating, and carry those through.” The axle and transmission also were sized to accommodate the 25-ton machine and then was utilized in the 20 ton. Even though the control systems, valves, and joysticks are different between the two RT models, the primary control valves are the same and are able to facilitate a pilot or an electronic actuation. “That helps us from part number management, to sourcing, to volume-based pricing,” Slocombe adds.

The RT500 is beginning pilot unit field trials, and the first production deliveries will begin in June 2017.

Broderson is also extending its carry-deck crane line with the 30-ton IC600 and 10-ton IC100, a variant on the IC80. The IC600 was made for applications that require a carry-deck capability with a 70-ft., four-section boom. However, like with the RT cranes, the design team focused on maintaining commonality among its new models, and it borrows the joystick-operated, electronic-over-hydraulic control system, the Cummins Tier 4 Final engine package, the dual 103-gpm capacity hydraulic pump design, and the rated capacity limiter system found on the RT500.

“What we see is larger carry-deck cranes are finding a place in the market in locations where they are uncomfortable with picking and carrying, and I want to set it down on the deck,” Bust says. He adds that Broderson products in general are different than big lift cranes. “We’re poking our boom points through pick racks and into corners and across things. We only use 100 KSI steel for our booms,” he says. “We’ve got to have something that’s stiff enough for hard-to-reach areas that you just don’t winch down the boom, as it deflects onto the load.”

The IC600 will be the largest capacity, longest reaching carry-deck crane on the market when first production deliveries begin in August 2017.

Rounding out the newest mobile crane line is the 10-ton IC100, which offers a capacity improvement and a new 35-ft. boom, turntable, counterweight, and hoist that’s mounted on the same rugged structure, power train, and hydraulic system of the popular IC-80, which was first introduced in the 1970s. Slocombe says improvements were driven by the desire to improve the capacity of the crane. The IC100 reflects on new market requirements while maintaining many features that made it such a popular model. First deliveries of the IC100 begin in March 2017.

Finally, Broderson has alluded to another new product at ConExpo that combines the hoist capability of a crane in a telescopic forklift package. This new model will be shown as a concept product with first production deliveries scheduled for late 2017.

Continue Reading
464
Share LinkedinTwitterFacebookEmailWhatsApp
Subscribe to our newsletter
Sign up here to get the latest news, updates and special offers delivered directly to your inbox.
You can unsubscribe at any time
Leave a comment