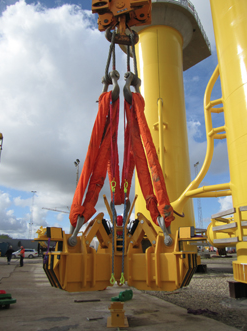 It no longer needs to take an hour to get ready to lift the 370 ton heavy offshore wind turbine foundation parts, also called Transition Pieces or TP’s, from dock to vessel – and from vessel on to the offshore monopiles. Fyns Kran Udstyr (FKU) has developed a hydraulic yoke that makes the TP ready to lift within 10 minutes – only needing one employee to handle and adjust the TP.

Since the TP is now plumb and level, the risk of tilting when the TP is placed onto the vessel is minimal. The same safety remains on sea, where it is even harder to handle the enormous foundations, when they are lifted into place over the monopolies.

The newly invented yoke is developed by Danish engineers from Fyns Kran Udstyr, and approved by Germanisher Lloyds. The engineers have documented every detail of the unique construction in accordance to EN Norms. From the beginning the goal has been to improve the safety and working conditions compared to the known method with Pad Eyes, and at the same time speed-up the process and thereby save money at every lift.

Continue Reading
642
Share LinkedinTwitterFacebookEmailWhatsApp
Subscribe to our newsletter
Sign up here to get the latest news, updates and special offers delivered directly to your inbox.
You can unsubscribe at any time
Leave a comment