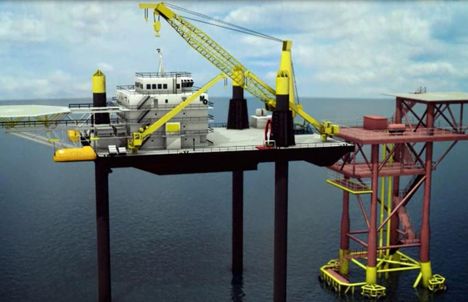 The first unit has been manufactured as part of a four-crane package to be mounted aboard Montco Offshore’s Liftboat Robert, one of the largest pipe leg self-elevating liftboats in the world.

The crane was sized and designed to allow the Robert to lift and install offshore wind turbine generators. It will also be used for platform decommissioning, wire line, crane operations, pipe-laying and diver support platform.

The new crane features a horsepower management system that matches load, speed and available horsepower across multiple function inputs. For example, it can detect if one or more of the motors is operating at maximum power and can make hydraulic system adjustments accordingly, in an effort to protect the motors. Three, 300HP electric motors add to the crane’s reliability by allowing full crane functionality with only two motors, thereby eliminating downtime in the event of a motor failure.

Charles Moses, senior vice president of Oil States Offshore products said: “The 7000L provides increased capacity for the expanding range of offshore activities our customers engage in. It has the size and capacity the industry is demanding along with very sophisticated control capabilities for highly precise manoeuvres.”

Continue Reading
featured
805
Share LinkedinTwitterFacebookEmailWhatsApp
Subscribe to our newsletter
Sign up here to get the latest news, updates and special offers delivered directly to your inbox.
You can unsubscribe at any time
Leave a comment