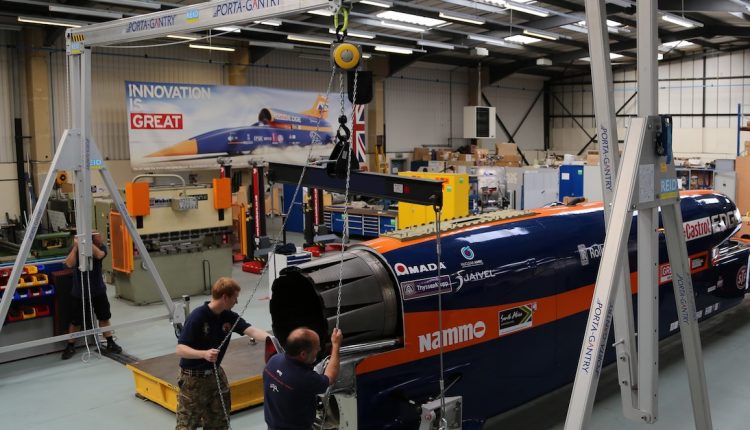 Two lightweight gantry cranes from Reid Lifting continue to play an integral role in ongoing construction and testing as the planet’s most advanced straight-line racing car, Bloodhound SSC, is prepared for its landmark world record attempt.

The Bloodhound Project is an international education initiative focussed around a 1,000mph (1,609kmh) world land speed record attempt. The primary aim is to inspire the next generation of scientists and engineers by showcasing science, technology, engineering, and mathematics (STEM) subjects in the most exciting way possible.

The project acquired the first Reid unit, a 2,000kg Porta-Gantry with integrated 360 chain block and geared trolley, from a third party. It has a maximum height of 5,829mm and a 4,570mm-long beam. Interestingly, Reid noted reference to Bloodhound’s use of the crane on its Twitter feed in November 2014.

Direct dialogue was subsequently opened and, a year later, a second gantry was supplied, this time a custom 3,000kg capacity crane, offering 5,027mm of height and a 8,000mm-long beam (the beam has a deeper section to enable the rating over such a length). It was also fitted with a rope control system for movement of the trolley and wind-up jack legs for uneven ground and load spreading for use when in the desert during testing.

Bloodhound SSC is a combination of fast jet, F1 car, and spaceship. At full speed it will cover a mile (1.6km) in 3.6 seconds—that’s four-and-a-half football pitches lay end-to-end, per second, or 300m in the blink of an eye. The current record of 763mph (1,228kmh) is held by Thrust SSC, a UK team led by Bloodhound’s project director Richard Noble and driven by Andy Green.

The next milestone will be reached in Q2 2019 when the car will run for the first time on its specially created racetrack at Hakskeen Pan, South Africa. The team will be targeting 500mph—a key milestone on the journey to setting a new record—and the gantries will be travelling with them. They were also used during successful tests at Newquay last year when the vehicle ran for the first time at speeds of over 200mph.

The gantries have already been widely used at Bloodhound’s technical centre in Bristol, lifting the upper chassis and jet engine (weighing up to 1.5 tonnes) on and off the car during the key assembly phases of the build. When complete, Bloodhound SSC is 2m tall, 13.5m long, and weighs 7.5 tonnes.

Nick Battersby, managing director at Reid, said: “It has been a great project to be associated with as it is at the forefront of automotive and aerospace engineering. The project is very high profile and the Reid gantries are frequently in clear view on project media images, exposing us to a wide audience in the engineering world. The gantry lifting the Rolls-Royce [EJ 200] jet engine has been used in much of our marketing materials and has led to some great opportunities for us in the aerospace sector.”

He added: “We have also embraced the project’s ethos of inspiring the next generation of engineers and we have two young Reid engineers that present to local schools as STEM ambassadors for the Bloodhound SSC, which is a great way for us to engage with the community.”

Bloodhound highlighted the height of the gantries, their versatility, and ease of transportation as standout features. It added: “Reid Lifting has been a key part of the Bloodhound build phase. After consulting with the team to identify their unique needs, Reid not only supplied the right product, but also training on how to use and maintain the equipment.”

Reid’s Tim Battersby, technical sales engineer, and Luke Rossiter, design engineer, delivered that training over a number of visits. In September 2016, for example, the pair trained engineers on the 3,000kg capacity crane with rope control system at the same time as witnessing the lift of the SSC car and its movement onto the surface table using both gantries in tandem.

Continue Reading
Bloodhound ProjectChain BlocksGantry Cranes
354
Share LinkedinTwitterFacebookEmailWhatsApp
Subscribe to our newsletter
Sign up here to get the latest news, updates and special offers delivered directly to your inbox.
You can unsubscribe at any time