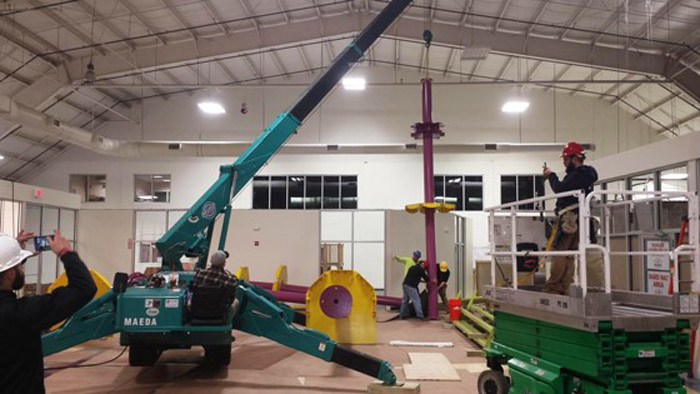 As a mobile crane sales and rentals operation in New England, upstate New York, and eastern Pennsylvania, Wood’s CRW recently noted how busy its fleet of Maeda mini-cranes have been in the region.

Winchester High School, Winchester, Mass
With the prohibitive cost of new construction, the Winchester, Mass., school district decided to renovate the Winchester High School gymnasium in phases, including the reinforcement of the gym and relocating mechanical equipment to an area above the gym. The gym required erection of 200 tons of steel by Universal Steel Erectors, Weare, N.H., which had rented the Maeda MC305-2.

While the gym is an expansive area, the Maeda placed the steel on a mezzanine and then was lifted into place on the second level with a rough-terrain forklift in order to lift and place the steel in a confined area. Lift requirements were up to 4,500 lbs. for fabricated steel frames. Universal had rented the same Maeda in the past and provided the certified operator.

“Our customer had experienced the advantage of using a mini-crane on past projects, so they were familiar with the capabilities of the Maeda,” said Varricchione. The company performed the steel erection at much lower cost than a large crane and finished the project in two months using the mini-crane.

With the YMCA’s long hours and the need for quiet, no-emissions operation, the Maeda operated on electric power. “We considered erecting the climbing system during third shift, but they decided to do the work during second shift because the Maeda was so quiet. Aerobics classes and the daycare center continued to operate during construction,” said Varricchione.

At only 54 in. wide, the MC405 was able to drive through double doors. Using its 55-ft. maximum lift height and maneuverability, the Maeda had the project done in 2.5 days. A 2,500-lb. steel staircase was no problem for the machine’s 8,400-lb. lifting capacity.

Continue Reading
Maeda
578
Share LinkedinTwitterFacebookEmailWhatsApp
Subscribe to our newsletter
Sign up here to get the latest news, updates and special offers delivered directly to your inbox.
You can unsubscribe at any time
Leave a comment