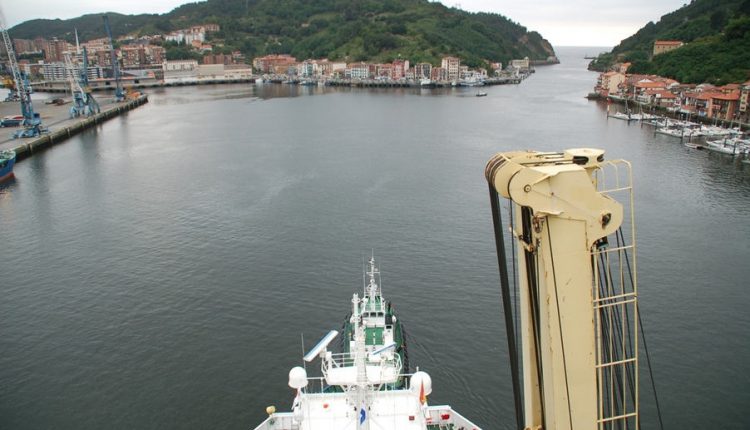 Accessible only via a narrow channel between the cliffs and a steep coastline in the Bay of Biscay, the narrow port is almost invisible from the sea – only a crack in the rocks can be seen.

Entrance to the port required a 180 degrees swing close to the berth; with only 20 m clearance fore and aft and the use of only one tug the manoeuver was very tight, but Fairlift made it safely into port.

Fairlift used her 250-tonne capacity forward crane and 400-tonne aft crane to lift its cargo onboard – a ship-to-shore crane.

Jumbo had to measure the centre of gravity of the ship-to-shore crane prior to loading it onbaord Fairlift. At the first attempt, the crane was listing slightly above maximum allowance. The crane was lowered and the necessary adjustments were made. On the second attempt the crane was safely hoisted onboard. The lift took under two hours to execute.

Over the next 24 hours the crane was securely lashed, the rigging unhooked, the stabiliser was disconnected and the boom of the crane lowered. Fairlift drew crowds of spectators as she set sail from Pasajes.

The crane was delivered to the Port of Sagunto in eastern Spain. The unloading operation proved to be much easier than loading as Sagunto is easily navigable. The cargo was discharged within a day.

Continue Reading
367
Share LinkedinTwitterFacebookEmailWhatsApp
Subscribe to our newsletter
Sign up here to get the latest news, updates and special offers delivered directly to your inbox.
You can unsubscribe at any time
Leave a comment