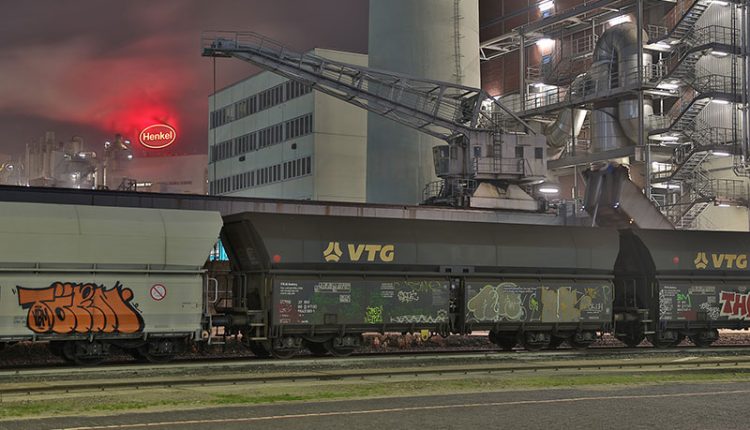 Terex Port Solutions (TPS) together with the Terex Fuchs team in Bad Schönborn (Baden-Württemberg) for the first time commissioned a jointly developed custom bulk handling solution for use in an industrial company at Henkel AG & Co KGaA (Henkel) in Düsseldorf in July 2015. A Terex® Fuchs SHL860D material handler with a cranked boom and a maximum working radius of 18 m was fitted to a rail-mounted undercarriage specially designed for this application. The new machine is operated on an existing 5 m elevated craneway with a track gauge of 3,500 mm spanning the coal storage area and the power plant installations of Henkel’s industrial power plant. In addition to coal, it also transfers combustion residues into the power plant’s hoppers or on to road trucks.

The Terex Fuchs SHL860D material handler is operated with eco-friendly energy from the electrical system in the works. The material handler can make use of the existing electrical infrastructure in the power plant. In addition to a cable reel, it has an on-board transformer to reduce the works voltage of 500 V to 400 V. This material handler replaces an old rope crane, which was supplied at the time under the Terex legacy brand Gottwald®, and was in continuous operation from 1958.

“The purchase of a new handling machine for the coal supply in our power plant became necessary,” says Hans-Joachim Kolb, production engineer at Henkel, “because our crane, which was more than 50 years old, no longer fully met the stricter new safety and environmental standards.”

Material handler takes local conditions into account
The Terex Fuchs material handler meets the requirement and application profile requested by Henkel, including the handling rate required for operation of the power plant. As an individual solution, the Terex Fuchs material handler rounds off the extensive bulk handling product range of TPS at the lower end. As Hans-Jürgen Schneider, Regional Sales Manager at TPS in Düsseldorf, says: “For some time now, TPS and the Terex Fuchs team have been working together all over the world on solutions for bulk handling in ports and terminals. Together with Andreas Gruber, Port Application Manager for Terex Fuchs, and manager of the project for Henkel, I am pleased that we have succeeded in developing a solution which can also serve as a reference for other projects in ports and industrial plants.”

The new material handler is also specially adapted to the existing local structural conditions. Unlike the old rope crane, the new Terex Fuchs machine has a solid hydraulic boom which can position the grab more accurately than before and which is particularly safe. Additional safety is provided by the ergonomically designed driver’s cab which can be moved forward by 2,200 mm and raised by about 6,000 mm above the rail level, giving the driver an excellent view of the working area. Other installations, including an automatic overload shut-off, complete the machine’s sophisticated equipment package. Thanks to a deadweight 20 t lower than that of the crane previously used, there is less load on the craneway and foundations and the power consumption of the material handler is reduced, according to operating conditions, by up to 40% compared to the previous solution. Finally, the new machine is quieter than its predecessor and requires little maintenance.

Terex synergies lead to a joint customized solution
Dr. Mathias Dobner, Vice President Engineering, Systems & Automation at TPS, also sees the Terex Fuchs SHL860D machine for the Henkel power plant as expressing a combination of tradition and innovation: “It is quite remarkable that Henkel has now replaced the rope crane originally acquired from Gottwald with another customized solution from us. We are also proud to have once again after half a century, convinced Henkel, a global operating company which, like us, has its roots in Dusseldorf, of the benefits of our technology.”

Thomas Berners, Director Operations for the Terex Fuchs team, sees an even stronger focus on joint developments as a strategic objective. “The cooperation with TPS was a logical consequence of the specific request from the customer, to which we responded with a customized solution. After we had analyzed the situation on the site around the power plant with TPS and Henkel, it soon became clear to us that uniting our capabilities could lead to success. In the development of the tailor-made solution, we then made use of all the synergies provided by Terex for the customer.”

Continue Reading
FuchsTerexTerex Corporation
557
Share LinkedinTwitterFacebookEmailWhatsApp
Subscribe to our newsletter
Sign up here to get the latest news, updates and special offers delivered directly to your inbox.
You can unsubscribe at any time
Leave a comment