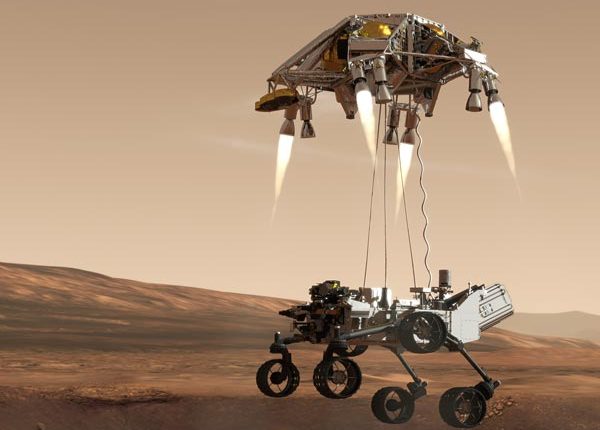 Using the Sky Crane allowed researchers to deliver a rover outfitted with extra equipment that brought the weight up to over 1t (900kg/2000lbs).

Previously NASA used an airbag system that made rovers crash land, bounce and roll on airbags, such as the 10.6kg Mars Pathfinder. Engineers at NASA’s Jet Propulsion Laboratory designed the Sky Crane especially for the Mars Science Laboratory mission.

Sky Crane’s lowering of the rover meant that the its landing location on Mars could be more precisely predicted, and that it could land on its wheels, ready to start work immediately.

As the spacecraft containing the sky crane and rover was speeding into the atmosphere, it fired up eight throttle-controllable rocket engines.

The spacecraft hovered in midair at a distance of 20m from the surface of Mars so the Sky Crane could begin lowering the rover.

Hovering in midair kept the engines away from the Martian surface so they didn’t kick up dust that could damage the rover’s instruments, which occurred on the Soviet Mars 3 mission. Three cables attached to reel drums lowered the rover’s one-tonne payload. An additional cable carried electrical signals to and from the rover, supplying information to the computerized system.

The cables continued to reel out, lowering the rover as it extended its wheels for landing.

Two seconds after an electrical signal confirmed the rover had touched ground, the system activated pyrotechnics that cut the bridle cords.

For the next two years the rover will conduct tests on Mars taking data that could prepare for a future NASA manned mission.

Continue Reading
774
Share LinkedinTwitterFacebookEmailWhatsApp
Subscribe to our newsletter
Sign up here to get the latest news, updates and special offers delivered directly to your inbox.
You can unsubscribe at any time
Leave a comment