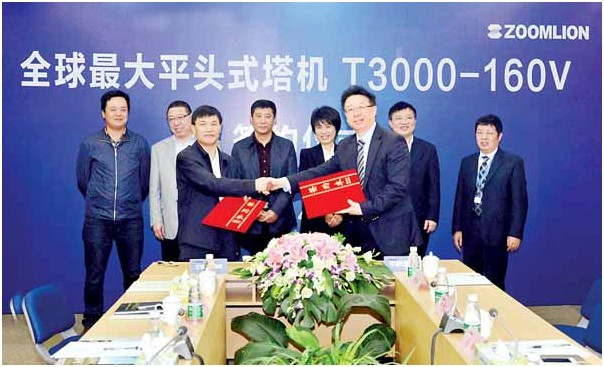 At the signing ceremony, both Huang Qun and Liu Zhongming delivered speeches in which they stressed the great significance the signing would have for the development of both companies as well as their wishes to establish long-term cooperation and mutually beneficial development. Yu Lekang delivered an in-depth technical explanation of the T3000-160V’s capabilities. The T3000-160V is a new product that uses technology designed by Germany’s JOST Cranes, and it fully demonstrates Zoomlion’s strengths in research and development and manufacturing large tower cranes.

According to plans for China’s electric power industry, total annual average electricity consumption is expected to increase by around 8.8% and 5.6% during the 12th Five-Year Plan and the 13th Five-Year Plan periods, respectively. The majority of China’s electric power still comes from thermal power, and installed capacity of thermal power will continue to increase over the next several years, with new 1,000,000 kW units making up the majority of plants. How to construct and configure the most economical and most efficient lifting equipment for 1,000,000 kW thermal power plants has become a key issue for every company involved in constructing electric power plants. Using an extra-large topless tower crane as the main lifting equipment in large thermal power plants is the preferred solution of Jiangsu Jiang’an Group’s Electric Power Construction Company, and Zoomlion’s large topless tower cranes have become the company’s first product choice.

Extra-large topless cranes can be widely used in the construction of thermal power plants, as well as in the construction of large venues, large bridges, large metallurgical plants, and super high-rise buildings. Large thermal power plants require a main tower crane with a large lifting torque, large lifting capacity, wide boom coverage, narrow lifting hook unit, narrow crane body, small base, precise placement, high work efficiency, and reliable safety record, as well as one that is convenient to assemble and disassemble. In order to satisfy the specific requirements of customers, Zoomlion’s research and development is directed at being the world’s best and providing customers with the largest topless tower cranes, the most high-end topless tower crane technology, and the safest solutions.
Development of the T3000-160V has improved Zoomlion’s range of topless tower cranes and enhanced the competitiveness and industry influence of Zoomlion’s tower crane products. It has also further increased the market share of Zoomlion’s tower cranes and become a new profit growth point for the company.

Continue Reading
Zoomlion
371
Share LinkedinTwitterFacebookEmailWhatsApp
Subscribe to our newsletter
Sign up here to get the latest news, updates and special offers delivered directly to your inbox.
You can unsubscribe at any time
Leave a comment